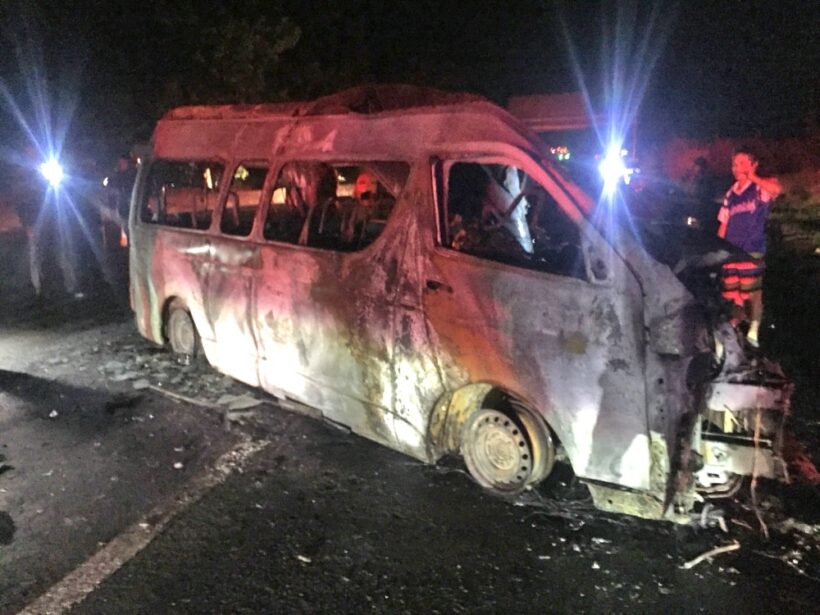 Thirteen Burmese workers and a Thai driver were killed when a chartered van burst into flames after it crashed into the rear of a truck in Sing Buri early yesterday.

The bus was taking the workers from Tak back to Mahachai, police said. The victims’ bodies were taken to Bangkok’s Police General Hospital for identification. So far, only Thai driver Pathompan Panpol, 46, has been identified. Police suspect he fell asleep behind the wheel, causing the collision. A forensic police inspection found no trace of braking at the scene.

The van’s left front wheel collided violently with the truck’s right rear wheel. Police suspect this caused the van’s battery to spark and the resulting flame quickly spread to the van’s petrol tank. The sudden blaze left no chance for the passengers to escape. If the impact had occurred at another part of the vehicle there would not have been such extensive damage and the death toll might have been different, a police source said.

The two year old van was one of three in a convoy chartered to take documented migrants from Samut Sakhon’s Mahachai district on Wednesday to renew their visas at the border checkpoint in Tak’s Mae Sot district. 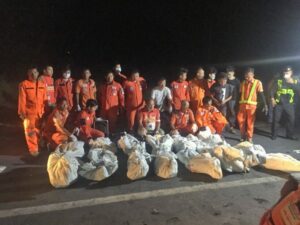 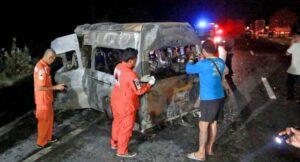 Sing Buri superintendent Pol Colonel Thakerngwuth Kittisupakhun said the bodies required identification, although police had a list of the victims’ names and would contact the workers’ relatives in Myanmar to provide DNA samples for confirmation. Pol Captain Jiradej Duangrassamee of Mueang Sing Buri precinct, said he was alerted to the accident at 3am.The fire was still raging when he arrived at the scene on the Bangkok-bound Asia highway in Tambon Bang Mun and it took 20 minutes to put out the blaze, he said.

The driver of the 10 wheel truck, Sunthorn Fakthong, 56, said he had been driving in the left lane when the van violently hit the truck’s rear and burst into flames. A source said Boonreun Tour Co, a legal provider of migrant worker transport, had kept up good insurance coverage and was now awaiting victim identification before proceeding further.

SATURDAY MORNING BRIEFING – All your local news in 3 minutes