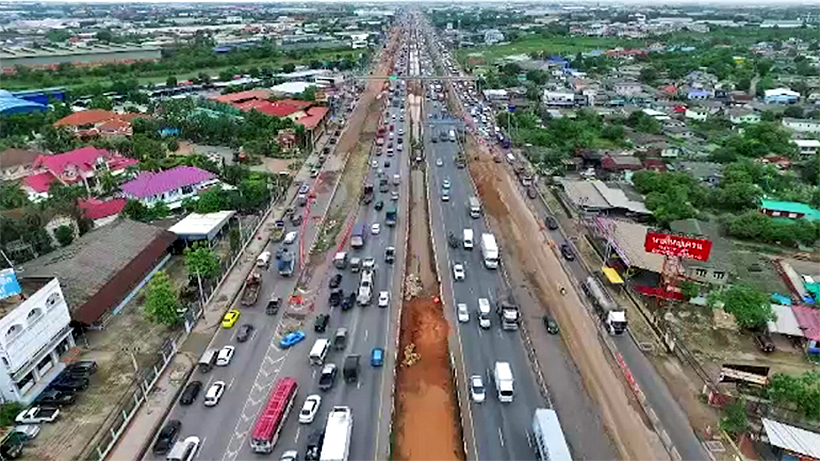 Local residents living along the road upgrades to Rama II Road (Highway 35) are having to cope with worsening traffic congestion and air pollution. The construction works started in June and are expected to be completed by the end of next year.

Piyaphong Jiwattanakulphisal of the Bureau of Planning, Department of Highways, said that the 11 kilometre Rama II Road upgrade project is using more technology to reduce the discomfort caused to the local residents and commuters. But locals aren’t noticing less “discomfort” or seen any evidence of “more technology”.

A woman waiting at a bus stop says she now has to wait over 30 minutes for a bus so she can get to the Social Security office just 7 kilometres away. The bus is usually late due to heavy traffic around the construction site.

Thai PBS reports that the upgrade project involves improvement of the 11 kilometre stretch of Rama II Road starting from the point where it is connected with Bang Khun Thian-Ekkachai ramp, to widen it to four lanes both inbound and outbound, widening of adjacent frontage roads, laying a new drainage system and installing roadside lighting, along with Bang Nam Jued-Khok Khwai canal bridge expansion.

Dr. Piroj Jiraboon, special lecturer, Faculty of Architecture, Chulalongkorn University, said that the worsening traffic situation can be prevented if workers at the site are properly trained. He suggested that the Department of Highways could have rented private space along the road to keep construction equipment off the main road, which would help ease the flow of traffic.

“If only agencies responsible thought a little more about the impacts of the construction on the communities, the suffering of the local residents would be reduced” he said, adding that the Rama II Road has gone through a series of upgrades in the past 30 years and people should not have to suffer anymore.

Transport Minister, Saksayam Chidchob, says that the construction works on Rama II Road will be completed by the end of 2020.

A college student says she is spending much more time on the road because of the traffic and the air is so polluted, though she says she has grown used to it.

Another woman says she had to change her travel routine during the construction, saying it is a sacrifice she had to make for a better travel alternative in the future.