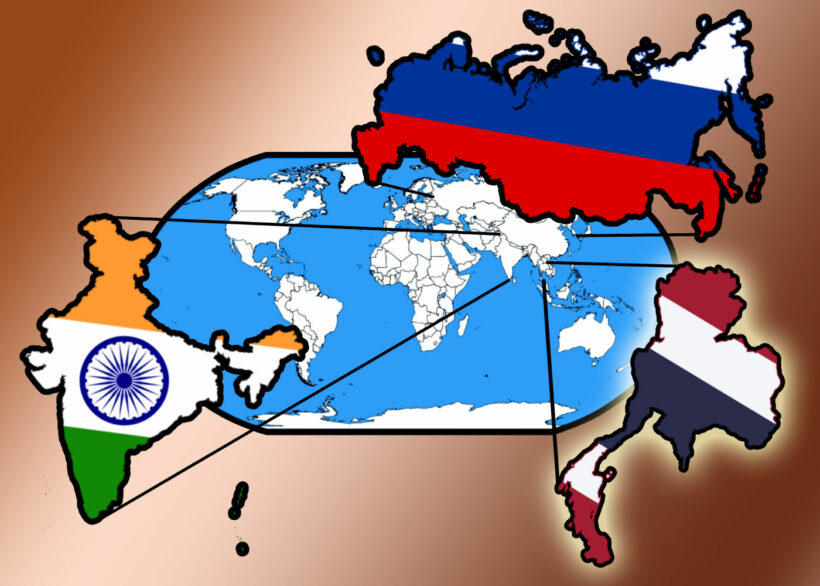 PHOTO: Thailand tourism groups call for Russia and India to be added to the safe country list. (via Wikimedia)

Now that the 46 countries that can enter Thailand on November 1 without quarantine have been announced, many in the tourism industry are calling for some notable absences to be added to the list. Tourism groups in major travel hubs are calling on the government to add Russia and India to the list of approved countries, believing it will massively boost the number of travellers coming into Thailand this high season.

Russia didn’t make the cut for the 46 approved countries because of a recent surge in Covid-19 in the country the only has about a 33% vaccination rate with a fair amount of vaccine hesitancy. The acting president of the Chon Buri Tourism Council lamented that charter flights may have to be cancelled as travellers from Russia aren’t interested in sandboxing or jumping through excessive hoops to come into Thailand.

India finds itself in a similar situation as many people have been vaccinated using Covaxin which has yet to be recognized by the World Health Organisation or the Thai government as an approved vaccine. As a result, those inoculated with Covaxin will not qualify as fully vaccinated and will have to endure a quarantine of 10 days, or 14 if they travel overland into Thailand.

Any sort of quarantine eliminates a large portion of potential travellers from India as they tend to travel for an average of four to five nights for a short getaway.

While 46 countries will be able to enter Thailand without more than a one-night delay while waiting for test results, those who aren’t from those countries but are fully vaccinated with an approved vaccine can go through a Sandbox program and what is now called the Blue Zone, 17 provinces that require a one-week arrival day before being allowed to travel freely in Thailand.

The tourism council president says that without the Indian and Russian markets, Pattaya will suffer this high season. The extra restrictions placed on those two countries plus required quarantine upon returning home for some residents in low-risk countries will drive away potential tourists.

Add to that the confusion over the Thailand Pass that is replacing the certificate of entry in just over a week but has not yet been launched or fully laid out, and the tourism revenue prospects of places like Pattaya are unlikely to look terribly rosy for the time being.

JohninDublin
4 hours ago, Bob20 said: I'd been patiently waiting until end of 4th quarter to get the data, but didn't see them available to date yet. Well, there you go... That's what I had been assuming for some time based…
Bob20
41 minutes ago, JohninDubin said: I don't think I ever bashed you. I only said or implied that there was nothing in your claims that amounted to evidence, because it could be explained away or you couldn't produce any figures…

JohninDublin
22 minutes ago, Bob20 said: Thanks, that's considerate, but I wasn't referring to you John. Anyway, good detailed discussion. It really goes to show that as long as people are not over-invested in being "right", good data can change people's…

BigHewer
16 hours ago, JohninDubin said: It really goes to show that as long as people are not over-invested in being "right", good data can change people's opinions. That’s a very good point, John. I actually changed my opinion on another…

JohninDublin
6 minutes ago, BigHewer said: That’s a very good point, John. I actually changed my opinion on another topic here a day or two ago after engaging in some spirited discussion. But I was “somewhat invested” rather than “over-invested” on…