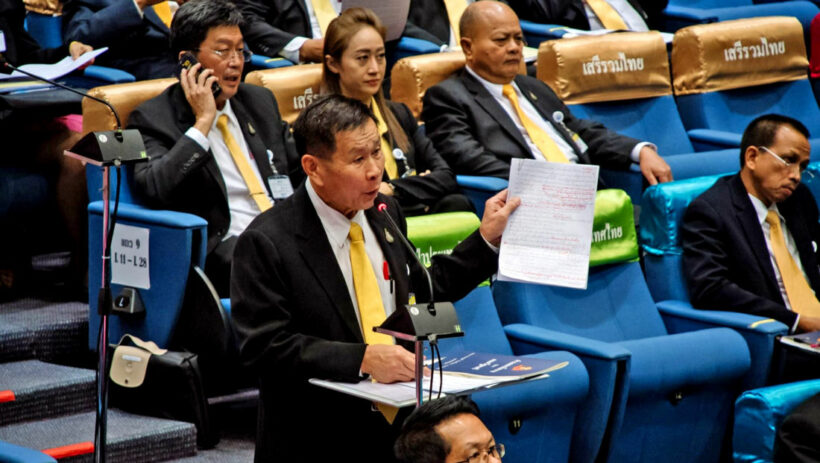 Seri Ruam Thai party leader Pol Gen Seripisut Temiyavet, former Police Chief appointed by the NCPO, is taking the fight right up to the PM and the coalition, hinted to the media before parliament resumed todaythat he still has enough ammunition to fire at the government and, particularly, Prime Minister Prayut Chan-o-cha.

During his time as the Junta’s chosen police chief it appears he was well and truly rubbed up the wrong way and is using his time in front of Parliament to pass on a few ‘dark secrets’ from the five years of military rule.

Today, he told the media, he would mention the government’s omission of budgetary issue in the policy statement which is deemed a violation of the Constitution and, secondly, the status of the cabinet which is not legally completed.

Thai PBS reports that Seripisut said that he would skip the issue about the qualifications of some cabinet ministers, saying that “somebody may go ballistic”.

The former police chief was told to leave the meeting late last night after he refused to withdraw his accusations against the PM as demanded by Pornpetch Wichitcholachai, vice president of the parliament who chaired the meeting.

When the meeting resumed this morning, Pornpetch asked the whips of the government and opposition parties and the Senate to consider the remaning time for the debate and the lineup of the speakers.

Palang Pracharat MP of Ratchaburi province Ms Pareena Kraigupt asked the meeting to consider whether Seripisut should be allowed back to the parliament after he was told to leave late last night.
She was booed and jeered by several opposition MPs who suggested that she should leave the meeting.

The parliament vice president later ruled that Seripisut could attend the meeting as usual after the incident last night was over.