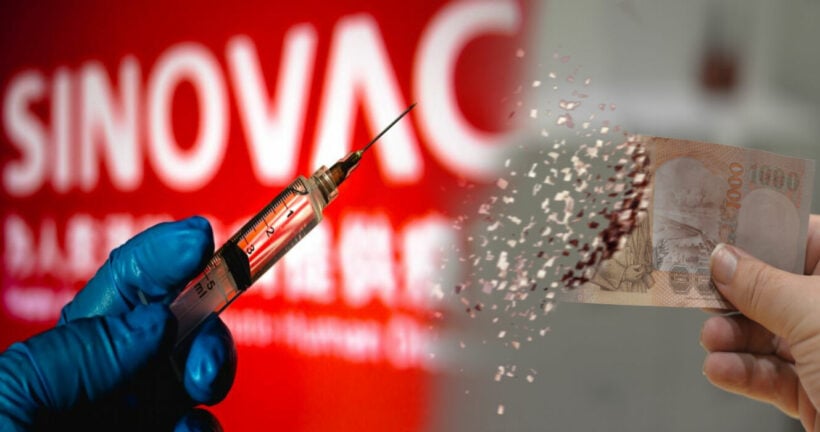 Complex, tricky accounting, embezzlement or a government going about its work in the middle of a pandemic? Accusations by the Pheu Thai opposition party are demanding Thai PM Prayut Chan-o-cha explain a 2 billion baht gap between what was allocated for Sinovac vaccine purchases and what was actually spent.

The charges, made under parliamentary privilege in this week’s no-confidence debate, claim that Thailand also paid inflated prices for vaccines that other countries purchased much cheaper and that the country’s reliance on Sinovac vaccines was linked to the manufacturer’s connection with a government-associated Thai business tycoon.

The accusations came yesterday as part the 4-day censure hearing to call for a vote of no-confidence for PM Prayut and 5 other high-level cabinet members, focusing on the bumbling of the Covid-19 vaccine procurement and rollout.

The Pheu Thai MP claimed that the corruption was possible by declaring a state of emergency, allowing PM Prayut to bypass procurement laws and directly purchase Sinovac vaccines, which were intended to be 10% of Thailand’s long-term vaccination program but soon became the primary vaccine brand for the country.

Thailand bought more and more of the less effective vaccines from China – a 6 billion baht purchase of 10.9 million vaccines in early July, and 5 subsequent purchases that are the basis of the skimming charges. The total budget allocated for the 5 deals was 10.8 billion baht, but only 8.7 billion baht went to the actual purchase, raising questions of what happened to the 2.1 billion baht unaccounted for.

The Government Pharmaceutical Organisation says that, due to currency exchange rates and vaccine price fluctuation, a higher budget than needed gets allotted to cover any unforeseen spikes in costs, but only the actual correct price at the time of the purchase is spent and the difference between the budgeted money and the actual price is never spent.

Pheu Thai claims that Thailand’s reliance on Sinovac was due to the close ties manufacturer Sino Biopharmaceutical Limited has with a wealthy and well connected Thai businessman. In fact, an official at the Chinese embassy said PM Prayut and his government was the first customer for the Sinovac vaccine, a product without any sales representatives in Thailand.

The Pheu Thai MP suggests that the businessman with close government ties and others who brokered the deal likely earned healthy commissions from the sale, driving up the price for inferior vaccines.

PM Prayut denied all charges and defended his actions and policy, saying he lives off his salary only while declaring that he would never do anything immoral and that he prays every day. He says he demands the same honesty from his government.

Responding to the accusation of 2 billion baht being pocketed, he challenges opposition leaders to find the missing funds and reveal who really took them. PM Prayut vowed that his government would thoroughly investigate any allegations brought forward regarding skimming from the purchase of Sinovac vaccines.

AussieBob
31 minutes ago, HolyCowCm said: Amnesty or clearing the convictions and jailing the the ones who convicted him and the ones who influenced the outcome. Maybe not threaten to go that far - then they might leave the barracks again…

AussieBob
16 minutes ago, Poolie said: I find the difference between the two, moot to say the least. You are either within a bent system or you arent. There is no such state as a little bit corrupt. Just my opinion,…
HolyCowCm
32 minutes ago, AussieBob said: Maybe not threaten to go that far - then they might leave the barracks again and do another takeover 'for the good of the Thai people'.  Thailand needs them to stay in their barracks and…

Poolie
6 hours ago, AussieBob said: All good - we will have to agree to disagree.  I believe that there are degrees of 'bent' that are acceptable, just like there are degrees of lies that are also acceptable.  Like when your…
MTa449
11 hours ago, Yinn said: I agree ..Thanathorn and the move forward party would best govern the country but until there is a new and legal constitution there won't be fair elections to put them in power !

Anutin speaks in defence of handling of Covid-19 and vaccines