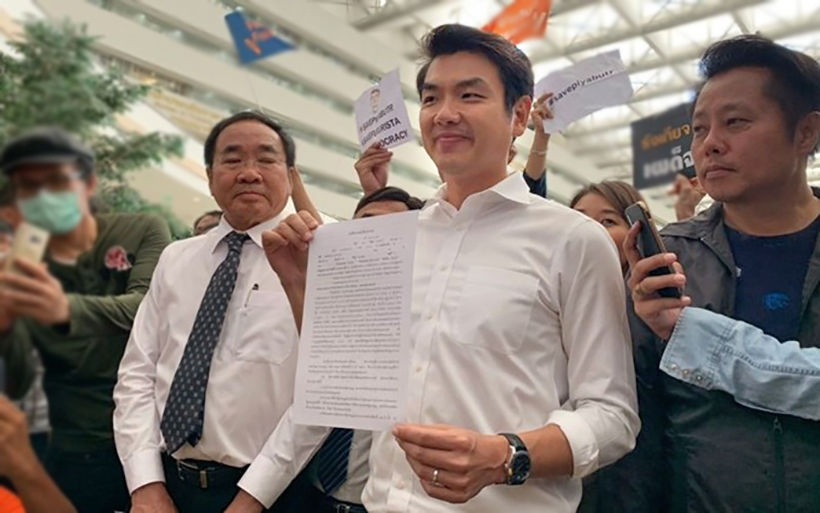 Future Forward Party’s secretary-general Piyabutr Saengkanokkul is urging the party’s 60,000 members and other supporters to switch their allegiances to a new party that would be formed if Future Forward ends up being dissolved by the Constitutional Court this week. The hearing by the Constitutional Court is set for Tuesday. Piyabutr acknowledges that the party will likely be disbanded.

Thailand’s Constitutional Court has handed down a number of decisions since the 2019 March election, heavily weighted in favour of the MPs and parties who support the Palang Pracharat party and the ruling quasi-democratic government of PM Prayut Chan-o-cha.

Yesterday Piyabutr at the “Future is now” event at Thammasat University at the Rangsit campus. The high-profile law professor branded the accusations against the Future Forward party and its leadership as nonsense. Both the party and its leader Thanathorn Juangroongruangkit have come under fire from pro-government supporters and activist since they won unexpectedly high support at last year’s election.

The petition to disband the party was brought by Dr. Natthaporn Toprayoon, a former advisor to the chief ombudsman. Natthaporn accuses the FFP, its leader Thanathorn Juangroongruangkit, party secretary-general Piyabutr Saengkanokkul and party executives of violating Section 49 of the charter. Section 49 prohibits actions that undermine the constitutional monarchy.

But Piyabutr describes the charges of being anti-monarchy as a patchwork of “spurious accusations against him and party leader Thanathorn Juangroongruangkit”. The charges have been drawn from content of Thanathorn’s interviews before entering politics, his involvement in the campaign for amendment of Thailand’s lèse majesté laws and the FF party’s reference to the 1932 revolution, which transformed Thailand from an absolute to a constitutional monarchy.

Piyabutr says none of these accusations prove either he or Thanathorn are seeking a republic or to overthrow the monarchy. He went on to claim that Natthaporn is afraid of the Future Forward party’s success and “wants to nip the party in the bud”.

Piyabutr openly dismissed accusations that he and Thanathorn are republicans and said that they are supportive of a constitutional monarchy.

“Those who accuse us are ultra-royalists who see us as radicals. In fact, they are the radicals. These people do not want change, want to hold back development and make us the enemy.”