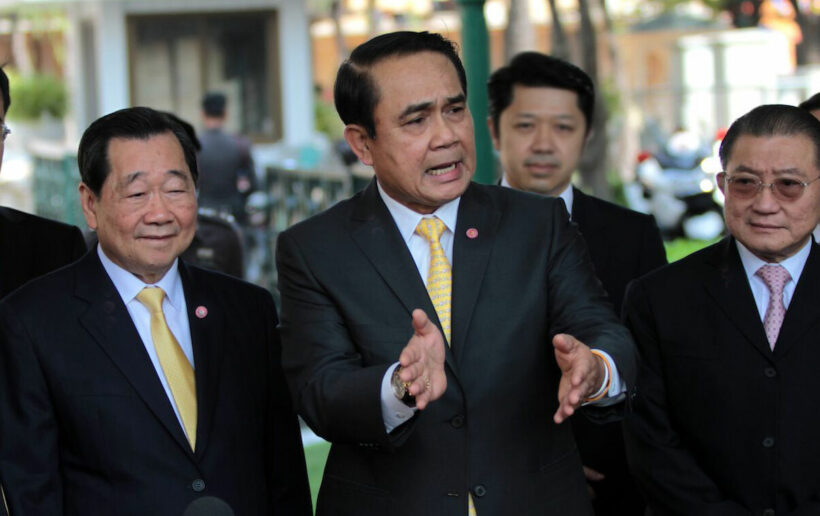 Opposition parties jointly issued a statement demanding the PM’s resignation. Among a list of general failures, they also accused PM Prayut of “causing irreversible damage to the nation”.

The opposition bloc, led by Pheu Thai, say the resignation would “pave the way for a professional government to take over”.

“The opposition will today or tomorrow submit to the National Anti-Corruption Commission a petition seeking to oust Gen Prayut. And if Gen Prayut still refuses to budge and tries to cling to power until the end of the new parliamentary session, he will witness the public’s reaction.”

Meanwhile, there were rumours circulating last week that Thammanat Prompao, a Palang Pracharat MP and alleged convicted heroin smuggler, would be given responsibility for overseeing the government’s coordination of Covid services and programs in southern provinces.

The Democrat Party balked at the prospect, threatening to walk away from the government coalition. The government have since gone silent on that idea, for now, and the Democrats have re-affirmed their support. Democrat MPs are now leading the southern Covid response. But it hasn’t stopped members of the Democrat Party’s leadership group from continuing their criticism of the PM’s general response to Thailand’s Covid crisis.

Anutin, and the Bhumjaithai party’s support, are crucial to the stability of the coalition. The importance can partly be measured by the roll out of cannabis reform since 2019 – a core policy platform of Bhumjaithai in the lead up to the March 2019 general election. There would have been no reform, or even discussions on the topic of cannabis reform, unless the conservative government caved in to the political expediency of ‘getting the numbers’ to form a workable government.

Anutin has been publicly sidelined after PM Prayut very publicly took over responsibility for all aspects of Thailand’s response to the Covid outbreak.

In the case of the PM standing down there would only be 2 choices for a replacement… Deputy PM and Public Health Minister Anutin Charnvirakul and former PM Abhisit Vejjajiva for the Democrat Party. The Thai constitution also involves the unelected and hand-picked 250 senators to take part in any parliamentary selection of a new Thai prime minister. Whilst that aspect of the Thai constitution remains in place the role of prime minister will be filled by a conservative supported of the military, not necessarily a voted member of parliament.

But the possibility of PM Prayut standing down is extremely unlikely as the nomination of either of the alternatives would almost certainly spell the end of the coalition.

Locally-produced AstraZeneca vaccine will be available by June