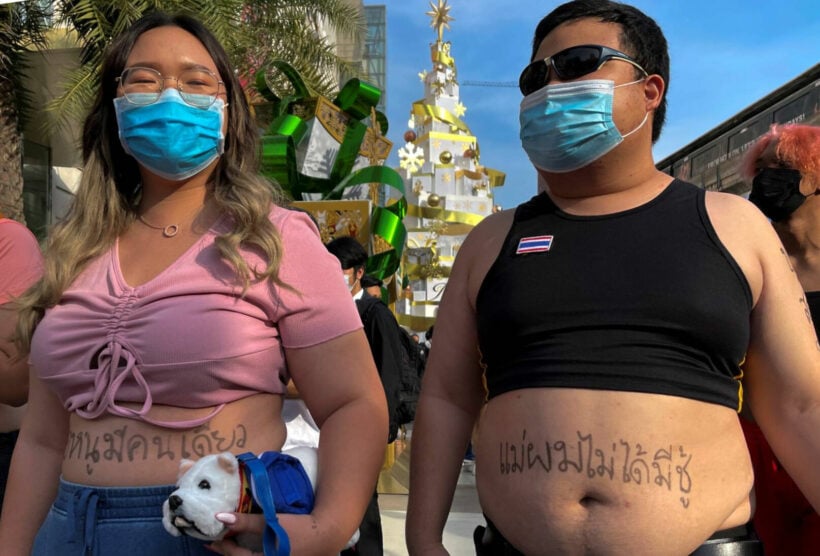 Thailand’s Criminal Court is rejecting the Ratsadon protesters’ bail again, referring to the same reasons made in previous rejections by the court. Earlier yesterday, supporters of the jailed protesters gathered outside the court, handing a letter demanding the release of the 7 prisoners.

Panupong Jadnok, Parit “Penguin” Chiwarak, Panusaya Sithijirawattanakul, Chaiamorn Wibulkaew, Arnon Nampa, Chukiat Saengwong and Parinya Cheewinkulpahtom have been jailed for over 50 days. Parit has even staged a hunger strike in protest to the court’s decision to reject his bail 9 times. Now, his health is reported to be deteriorating after hunger striking for 45 days, however the Corrections Department has denied reports of Parit excreting blood and flesh, saying he was physically well.

Police also accused Chukiat of placing a paper with offensive words on a portrait of Thailand’s King in front of the Supreme Court in Bangkok’s Phra Nakhon district. They say he was caught on CCTV, which then showed protesters allegedly setting fire to the portrait. When police asked them to stop, they allegedly threw bottles, and other projectiles. An MP previously applied for Chukiat’s release on bail by using his position, valued at 1.1 million baht, as security, but was denied. The court’s reasoning was that he may have done the same thing again, if he is released.

The protesters have mostly been charged with lèse majesté, inciting unrest, and breaking the Emergency Decree while taking part in protests. Brad Adams, the Human Rights Watch Asia director, condemned Thailand’s use of the lèse majesté law, saying the activists could be in detention for years until their trials are concluded. The HRW noted that Thai authorities have been “abusing” the draconian lèse majesté law by using it to “aggressively clamp down on speech they don’t like.

“Holding people in pretrial detention for peaceful expression portends a return to the dark days when people simply charged with this crime end up spending years in jail while their trials drag on interminably.”

Draft law on NGOs still cause for concern for activism groups