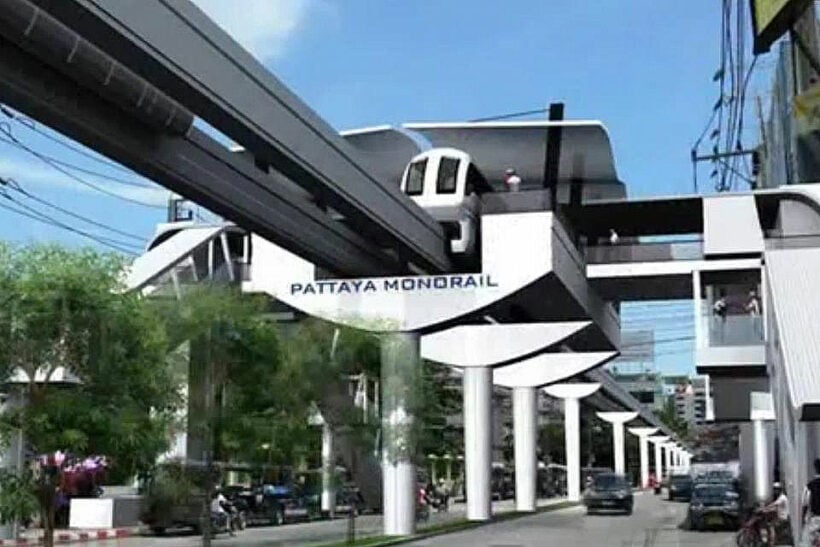 Nothing like the middle of a pandemic to announce a new monorail project. Undeterred, the Pattaya City council have announced a new 9 kilometre monorail as part of its Eastern Economic Corridor projects. They cite the need to ease traffic congestion caused by rapid urban growth in the seaside party town. They say the inner city area is in desperate need of a proper public transport system.

The City’s deputy mayor Manote Nongyai says that an “efficient system will be in high demand after the Covid-19 crisis eases, which will see an influx of tourists return to the city”.

“Pattaya has a wealth of potential for economic development, it has been plagued with traffic problems caused by rapid urban growth.”

But the planning is still in the early days and it’s not the first time that the monorail has come up. Just 5 months ago the Council was all excited about a new light rail tram system for the city. That appears to have fallen off the mayor’s desk and been replaced with this latest monorail project. Yesterday’s announcement was a chance to discuss the feasibility study, assess the environmental impacts and come up with designs for the development of a Pattaya monorail system.

The 9 kilometre monorail track would run from the Pattaya railway station along a motorway, to Northern Pattaya Road, Pattaya Sai 2 Road, Thap Phraya intersection to the Bali Hai Pier. The route passes some of the main locations for daily commuters, according to the deputy mayor.

The deputy mayor said Pattaya city hall is allocating a budget of 70 million baht for the feasibility study and said that the proposed monorail would link with the government’s ‘pin up’ EEC infrastructure which spans three eastern provinces of Chachoengsao, Chon Buri and Rayong. The council had already hired a consultants to study designs and environment impacts. There was no timeline for a completion of these components of the project.

He also said the monorail project could be an investment under a public-private partnership.

But some of the basic components of the system appear to have been decided already with the deputy mayor announcing that the the monorail system sit up on elevated steel-reinforced concrete pylons, with each pylon only 1.8 metres wide carrying the monorail tracks.

“That means they do not take up much space during the construction, which makes them suited for the narrow road surfaces in Pattaya.”

He also stressed that there would be no need to expropriate a lot of land along the proposed route for the construction process, meaning there would be less impact on local residents.