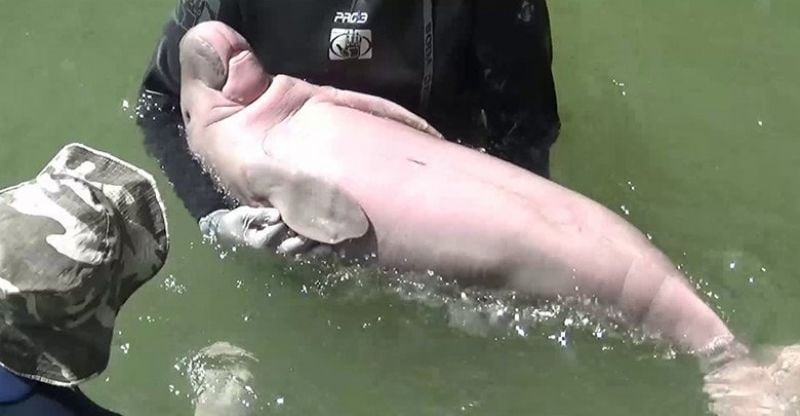 PHOTO: The baby dugong Mariam, who brought a lot of publicity to the plight of the local dugong population, died in August

Another dead dugong has been discovered floating in the Andaman Sea, between Koh Ya in Trang and Koh Ngai Island in Krabi. The corpse was discovered yesterday by a local tour boat.

It’s been a bad year for the local dugong population with many dead or sick mammals being discovered, and the high profile cases of Mariam and Jamil, the baby dugongs that were found but die later in captivity.

The find was reported to the 10th office of marine and coastal resources, by Mr. Somsak Panthumet, president of Trang professional tourist guides, as he led a tour group on an island-hopping tour in the Andaman Sea.

Somsak reportedly took pictures of the eviscerated dugong corpse as evidence to be handed over to the officials. He was also told to tie the dead dugong to some floating containers to make it easier to relocate.

However, when a boat was dispatched to collect the corpse, officials failed to find it after five hours of searching in strong winds and rough seas. Officials say they will resume the search again when the weather calms down.

After viewing the pictures taken by the tour guide, an official admitted it was impossible to tell the gender, age or weight of the dead dugong which, he added, was the 10th this year to be found in the sea off Trang province.

The seas around Koh Libong in Trang province is home to an estimated 200 dugong, Thailand’s largest concentration, thanks to the area’s abundance of sea grass.