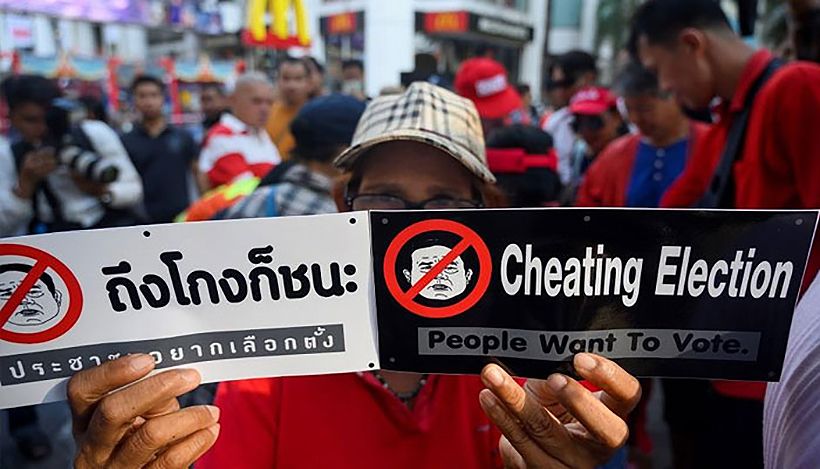 A former EC commissioner Sodsri Satayathum is calling on the agency to clear up all issues immediately before citizens launch an impeachment process, warning that the commissioners’ removal from office could postpone endorsement of the final vote results. The EC says full results will be ratified by May 9, but anger is mounting as the wait continues, prompting demonstrations at two Bangkok landmarks.A small but enthusiastic group gathered near the tourist hotspot Erawan Shrine whilst a larger protest was held near Bangkok’s Victory Monument.

University students and other citizens expressed their impatience with the EC’s inability to declare the credible full tally a full week after the election. Discrepancies in numbers provided by the EC have raised suspicions and it has been unable to provide credible explanations to allay public frustration.

The EC has also failed to manage misunderstanding spread over the internet. Every statement the EC issues on its Facebook page has been met with more cynicism.

More than 820,000 people have now signed a petition at change.org to impeach the seven EC commissioners. University students across the country defied school and state officials in setting up tables to gather signatures on petitions with a similar message.

Demonstrators in Bangkok gathered yesterday on the skywalk above the Victory Monument and around the Ratchaprasong intersection to protest the alleged lack of transparency in the election and the performance of the EC. However, the public disaffection might have no real legal impact, according to rights and legislation watchdog iLaw.

The current Constitution rejects public petitions against independent agencies, iLaw said, adding that the complaints should instead be taken to the National Anti-Corruption Commission, which could determine whether there was cause to submit the case to court.

While the public is seething and wants the EC held accountable for its perceived ineffectiveness and lack of transparency, former commissioner Sodsri doubted that impeachment would be a sound option at this stage.

“The investigation could take considerable time before the NACC and the court reach their conclusions. The matter might not invalidate the election altogether, the expert said, but the suspension could interrupt endorsement of the final results and delay other post-election processes.”

It would be best if the EC “came clean” about everything, Sodsri said. In constituencies where results are in question, the agency should reopen the ballot boxes and clear all doubts, she suggested.

Sodsri warned that impeachment of the commissioners would stall post-election activities and the junta would continue to hold the reins of power.