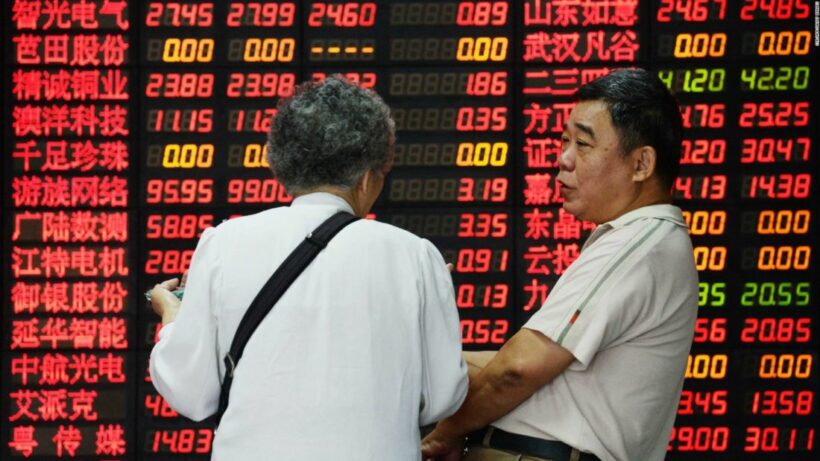 Asian markets fell after hefty losses in New York yesterday, owing to growing China-US tensions in the next round of trade talks, while the British pound continues to be beaten down by fears the UK is on the verge of crashing out of the EU.

The downbeat mood comes as investors fret over signs the global economy is slowing down. The International Monetary Fund is forecasting the weakest growth in a decade owing to long-running tariff disputes.

Days before high-level negotiations were due to resume, the US announced restrictions on 28 Chinese entities over human rights violations in Xinjiang province and imposed visa restrictions on some officials. Then Bloomberg News reported unnamed Trump administration officials had said the White House was mulling new measures to curtail US investment in the country.

For its part, Beijing has hit out at the decisions and moved to take steps against the National Basketball Association in a brewing row over a team manager’s remarks on Hong Kong’s protest movement.

A report this week had already said China had narrowed the issues it was willing to discuss at the talks, with observers saying Chinese leaders felt in a stronger position as Donald Trump faces an impeachment inquiry at home and a weakening economy.

Andrew Balls, at Pacific Investment Management, told Bloomberg News… “It will be interesting to see how it plays out this week between the US and China.”

“The flare-up comes at a time when we already see growth pretty weak in the first half of next year and you have at least some evidence of weakness in manufacturing spilling into services”.

While economic data has been increasingly weak in recent months, hopes for this week’s talks have been providing some much-needed support. But the latest developments were a reminder that progress would likely be rocky.

On currency markets, the pound struggled to recover from Tuesday’s losses as Brexit talks between Britain and the EU teetered on the brink, with both sides blaming the other with just three weeks until the October 31 deadline.

British PM Boris Johnson and German Chancellor Angela Merkel were unable to reach an agreement over the Northern Ireland issue during a telephone conversation. A Downing Street official quoted Merkel as saying the Brexit talks were “close to breaking down”.

With many economists warning a no-deal Brexit could be calamitous for the British economy, the pound tumbled against the dollar and euro and there were warnings it will fall even further.