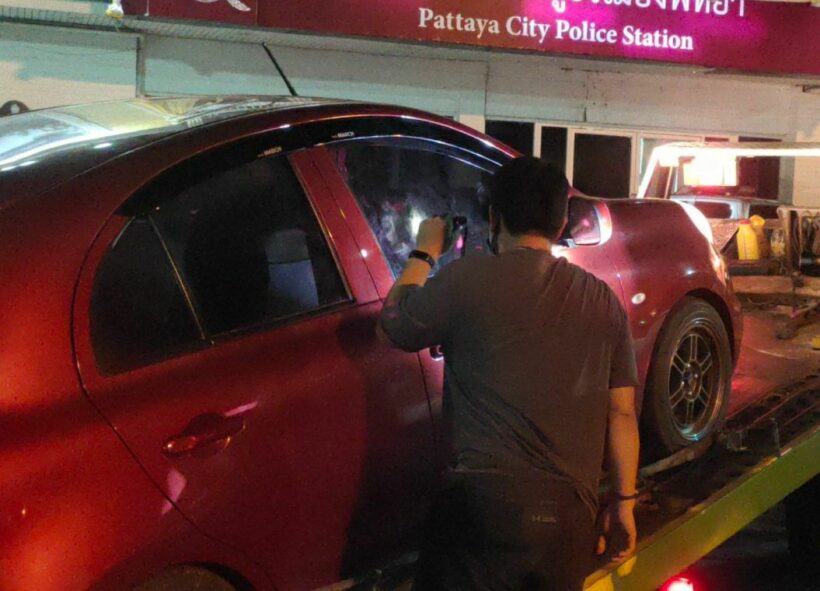 PHOTO: A suspect refused to exit her car for police at a checkpoint in Pattaya. (via Pattaya News)

Viral videos or live streams of encounters with the police have become a common occurrence in the United States and a few other countries, but on Friday a transgender person in Pattaya refused to exit her car after being stopped by police and live-streamed the whole event. The woman was a suspect after reports of a drug dealer in a car whose description matched her car and was carrying an e-cigarette, illegal in Thailand.

33 year old Eakksachai Temsomboon was stopped by police in South Pattaya after an anonymous concerned citizen called the police hotline to report a drug dealer driving a red car in the area. Police stopped her car at a checkpoint and requested a routine inspection. Later saying she feared police would plant drugs in her car or attack her, Eakksachai refused to exit the vehicle and instead started a live-stream of the event as the incident unfolded.

Her social media followers watched live as she refused to open her car door, even after police spotted an e-cigarette and attempted to arrest her. Vaping and e-cigarettes are banned in Thailand with strict laws and punishments on the books for those who are caught with them, up to and including prison sentences. It’s debatable how often those laws are enforced, but in this case, it gave police probable cause to insist on a vehicle inspection.

But Eakksachai was steadfast, refusing to open the door for so long that police eventually just towed the car with her inside to the Pattaya police station. There they were able to contact her mother who spent 40 minutes but eventually convinced Eakksachai to exit the car.

Joe
While one must appreciate how the Thai government protects it's citizens from many evils like pornography and e-cigaretts, I wish they would protect their citizens from COVID by aggressive and effective nationwide vaccinations! Priorities I guess...

King Cotton
1 hour ago, Joe said: While one must appreciate how the Thai government protects it's citizens from many evils like pornography and e-cigaretts, I wish they would protect their citizens from COVID by aggressive and effective nationwide vaccinations! Priorities I guess...…
js89
15 hours ago, ThairdOfBS said: I just dont understand why Vaping is illegal in Thailand, I mean Prostitution is also illegal but there's rumours it still goes on, kinda twisted logic! Because all tobacco products are sold by a government…
Scotty
Another show pony. It won't be long before there are cell signal blockers so this sort of behaviour.
MikeW
19 hours ago, King Cotton said: Illegalising 'evils like pornography and e-cigarettes' costs little more than the lawmakers' time, which they're paid for in any event. Vaccines, on the other hand, cost money, a resource that this government demonstrated was…

Confession and evidence, not a scapegoat, in Phuket murder