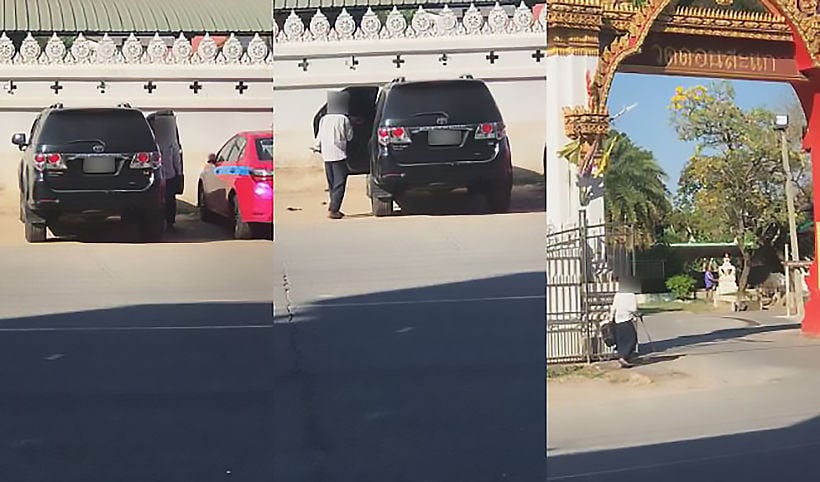 PHOTO: A Nonthaburi "beggar visits a parked Fortuner before heading to a nearby village with a cane - MGR Online

Beggars and the homeless remain a major issue in Thailand, especially in larger cities and tourist areas, and many choose to help, but their kindness is sometimes exploited.

Facebook user “Chaluta Joy” posted photos on Monday of a beggar, who’s been seen asking for money in different villages and markets in the central province of Nonthaburi, stepping out of a shiny new Black Toyota Fortuner parked in front of the Don Sa Kae Temple in Bangyai District.

The vehicle has a Bangkok license plate. The man is seen looking in the rear-view mirror, apparently to ensure he still looks a beggar. He places some items into the car before leaving with a bag and walking cane, heading to a nearby village.

Netizens have mixed opinions on the matter, some saying they now wonder if they should continue to give money to beggars, others opining that what he is doing is “better than committing crimes”, and some even think that the man might be an undercover policeman.

Chaluta captioned her post “What are you doing uncle? I’ve learned my lesson on giving people money. Uncle also goes to the Bang Bua Thong Market. Sorry uncle, I can’t see this alone”.