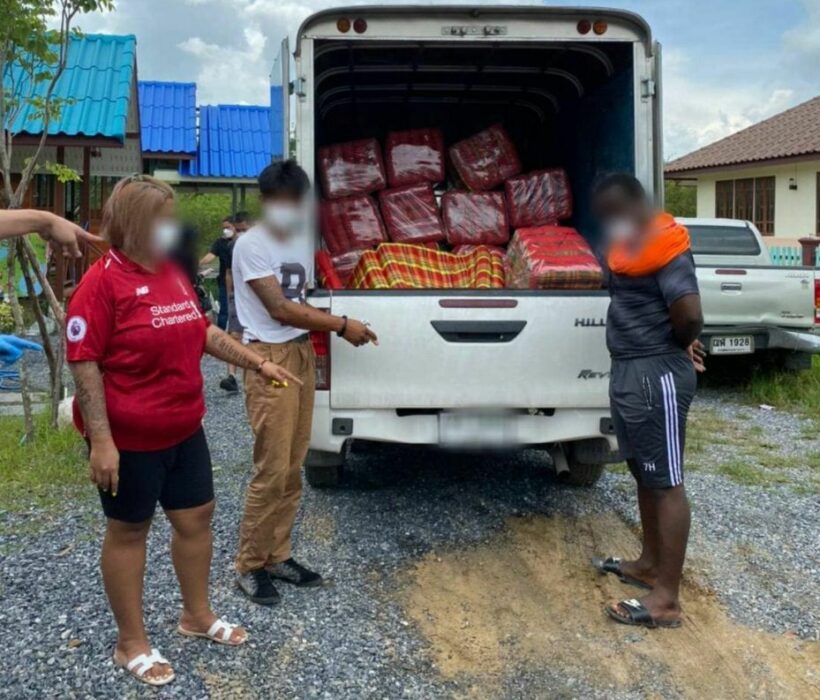 Police arrested 3 suspects and seized 10 kilograms of crystal methamphetamine stuffed in floor mattresses that were being prepared for shipment to Hong Kong. Over the past few months, Thai law enforcement has been cracking down on illegal drug shipments en route to other countries.

The Seaport Interdiction Task Force searched a pickup truck shipping company in the Navamin area of Bangkok’s Bung Kum district and found the methamphetamine hidden in folding mattresses on the truck. They say the mattresses holding the drugs were en route to Hong Kong. 27 year old Thai national Kornwik Jirabutr was arrested on site.

Officers followed up on the investigation and searched at a rented home in Ayutthaya’s Bang Pahan district. Police seized a mattress and packaging equipment, similar to the evidence confiscated at the shipping company. A 28 year old Thai national Natcharee Phenglam and 31 year old Nigerian national Christian Chibuike Emmauel at the home were arrested, according to the Office of the Narcotics Control Board.

Officers say Christian admitted that the drugs were smuggled into Thailand from Laos. With heightened border force along the Thai-Myanmar border over the past year, Laos is said to have become a major transit route for methamphetamine produced in Myanmar’s portion of the notorious Golden Triangle.

Following a major bust in Australia were a large shipment of methamphetamine was seized from a Thai cargo ship, the Justice Minister ordered Thai law enforcement to work with foreign agencies to investigate transnational drug trafficking with routes in Thailand.

During the announcement of the recent drug seizure at the shipping company in Bangkok, ONCB secretary-general Wichai Chaimongkhon mentioned the recent seizure Chon Buri’s Laem Chabang port where 314 kilogrammes of heroin was found hidden in paint buckets en route to Australia.

Wichai says police suspect 38 year old Keng On-iem, known as Mr Ek, is involved with the drug trafficking operation. A warrant had been issued for Keng’s arrest back in August of last year for allegedly smuggling 75 kilograms of heroin to Taiwan. Wichai says the suspect reportedly fled to Laos.

The ONCB plans to hold a video conference with representatives from Laos and Australia to discuss the transnational drug trafficking cases.