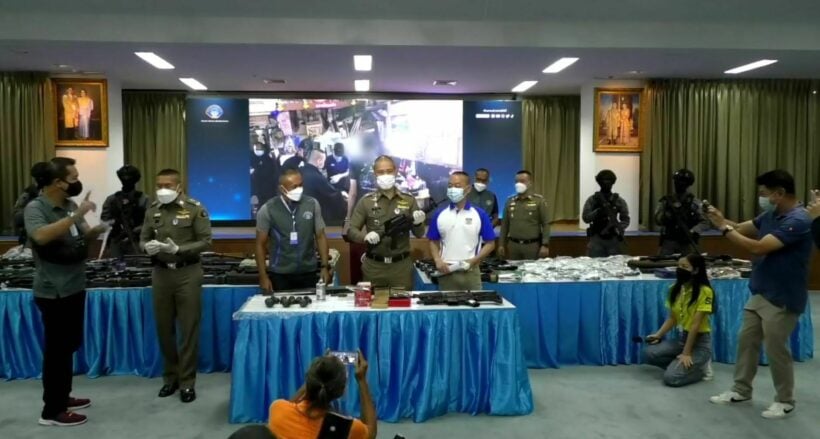 Thai law enforcement officers are cracking down on the illegal firearms trade, primarily on the online sales of guns. The Crime Suppression Division, or CSD, executed a series of raids this month, seizing dozens of illegal weapons and arresting several people on illegal weapons charges.

The raids were initiated following the investigation into the online sales of firearms on the Facebook group called “Chum Chon Talat Dam,” meaning “Black Market Community,” as well as through a Line group of 200 members.

Investigators tracked down the firearm sales to Songkhla’s Sadao district where police seized more than 40 firearms and arrested the suspected creator of at least one of the social media groups as well as several suspected group administrators, according to the superintendent of the CSD’s sub-division 6, Pongpanot Chukaew.

“One suspect said an agent in Bangkok works with a major arms trader, who runs a gold shop and courier service to hide his illegal arms business.”

Earlier this month, police launched a series of 8 raids in Bangkok and other provinces, arresting a gold shop owner in the Nong Khaem area who is suspected of being a major firearms trader online as well as 2 suspected accomplices on charges of possessing firearms without permission and possessing weapons of war, according to Pongpanot. In the raids, police seized 41 pistols, 15 rifles, 14 grenades and around 1,000 cartridges of ammunition.

In a follow-up raid on June 4, police searched a room at a Bangkok condominium and found 78 firearms and ammunition. CSD police made another arrest on June 9 and detained a 28 year old man outside a gun repair shop in the Phra Nakhon district. The man allegedly sold illegal weapons to the group in Songkhla. He had a warrant out for his arrest on charges of possessing firearms with intent to distribute.

The Central Investigation Bureau’s deputy commissioner Jirabhop Bhuridej, who had ordered for the raids, said “if we allow illegal arms trading to continue, it could lead to future crimes as most of the customers were found to be gun collectors, hitmen and even drug networks.”