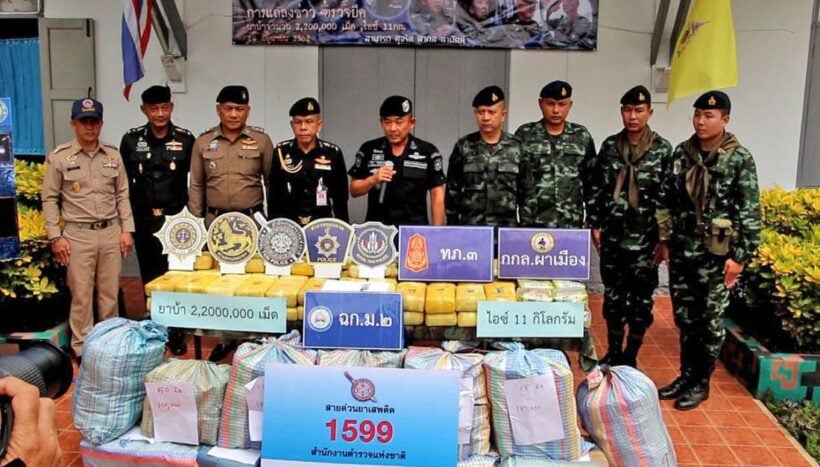 In the game of ‘catch me if you can’ between drug smugglers and Thai police, this was another successful interception of a large drug cache making its way into Thailand.

The Nation reports that Narcotics Suppression Bureau report that the drugs were supplied by the South Wa hill-tribal group based near Ban Pha Khao area in Myanmar, opposite the border to Chiang Rai’s Mae Fa Luang district.

The illicit drugs were seized from a car that tried to break through a checkpoint in Tambon Mae Chaen in Mae Chan district at 11.23pm on June 11. Police chased the vehicle and cut it off near Wat Phra That Saeng Kham. Two suspects from the car fled into the darkness leaving behind the large haul of drugs in 15 sacks.

The following morning police searched a house in Tambon Pateung, where they arrested a male suspect identified as Jasor Nunuko.

The recent crackdown has also led to drug gangs shifting their approach from previously sending a large batch of narcotics to multiple distributors – at more than 10 million meth pills at a time – to now sending narcotics in smaller amounts in the hope of better avoiding detection.

Laotian ladyboy arrested for stealing from Finnish tourist in Pattaya