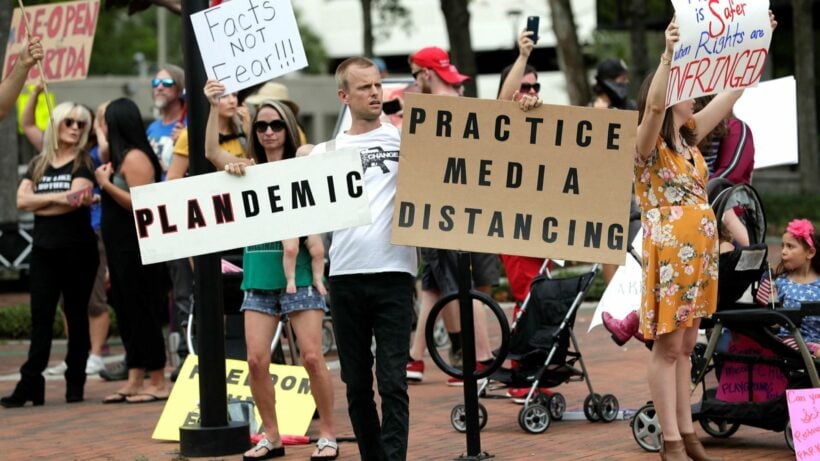 New Covid-19 cases in the US increase continue to drop slightly as the nation pushes over 200,000 deaths from the coronavirus. Meanwhile, Pfizer’s CEO predicts it’s likely the US will deploy an effective vaccine before the end of the year, despite scientists saying the forecasts are ‘optimistic’ at best.

CEO Albert Bourla maintained that it’s “likely” the US will have a Covid-19 vaccine to the public before year-end and that the company is prepared for that scenario, pushing back against more tepid expectations shared by health authorities.

Bourla says he’s “quite comfortable” that the vaccine the company is developing in partnership with BioNTech SE is safe and that it could be available to Americans before 2021, contingent on an approval from US regulators.

“I cannot say what the FDA will do. But I think it’s a likely scenario, and we are preparing for it.”

The 11,015 deaths recorded in the US between August 30 and September 13 were 17% fewer than the previous two weeks’ total of 13,244, according to figures from Worldometers.info.

“Currently, some 20% of the cases in hospital ICUs are people between the ages of 18 and 34 whose chances of survival are better than those for the elderly or already ill people.”

7 months after US President Donald Trump privately told The Washington Post’s Bob Woodward that the coronavirus was “deadly stuff,” the US continued to lead the world with 200,197 deaths and 6.8 million confirmed cases of Covid-19 (as of 11am Thai time).

Right now, the US accounts for over a 5th of the world’s 939,918 fatalities and a fifth of the more than 29 million cases, according to the Worldometers.info dashboard. The Institute for Health Metrics and Evaluation at the University of Washington, a research facility the Trump administration has quoted with its Covid-19 predictions in the past, is projecting there could be over 400,000 deaths in the US by the end of the year.

President Trump has denied lying about the severity of the pandemic to the American public following revelations over his interviews with Bob Woodard back in February. And despite the increasingly grim numbers, he has repeatedly praised his administration’s response to the crisis that has wrecked the US economy and continues to claim at least 800-1,200 lives each day across the country.

Although there has been a drop in new cases in Arizona, Florida and Texas – earlier ‘hotspots’ for the 2nd wave of cases across the US, South Dakota and neighbouring Midwest states are seeing big increases in new cases. Public health officials point the finger at the massive ‘Sturgis motorcycle rally’ last month, where there was little or no mask-wearing or social distancing, plus the resumption of children returning to school.

While US policy-makers and police grapple with how to enforce mask-wearing, the Jakarta Post is reporting that in Indonesia local authorities have come up with a jarring punishment for people caught not wearing a face mask. They’re making them dig the graves of Covid-19 victims. So far 8 people have been sentenced to the role of grave diggers.

“There are only three gravediggers at the moment, so I thought I might as put these people to work with them.”

Covid-19 testing units to be stationed along Thai-Myanmar border