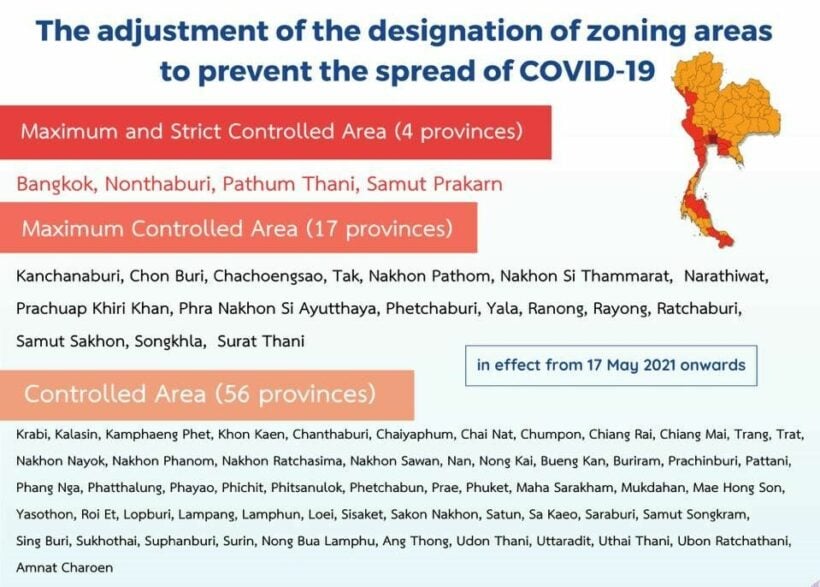 The Thai government has relaxed some Covid-19 restrictions across the country, while downgrading the risk level of a number of provinces. The number of provinces designated as “strictly controlled” areas, or “dark red” zones, has been reduced from 6 to 4. They are Bangkok and the central provinces of Nonthaburi, Pathum Thani, and Samut Prakan.

So, what, if anything, has changed where you are? Below is a summary of the situation across the country, courtesy of TAT News.

The “red zone” or “maximum control” areas now consist of the following 17 provinces:

There are now 56 provinces designated as “orange” or “controlled areas”, up from 26. They are as follows:

All other disease prevention measures remain in place, including mandatory mask-wearing outside of the home and the closure of “high risk” venues such as nightclubs, bars, karaoke bars, and massage parlours. Department stores, shopping malls and community malls must close by 9pm and refrain from holding promotional activities.

In dark red zones, there is a ban on gatherings of more than 20 people, with this number extended to 50 people in red and orange zones. In Phuket, an orange zone, officials have stipulated a ban on people visiting each other’s homes, with only those residing at a property permitted to be there.

In dark red and red provinces, convenience stores and markets can only open between 4am and 11pm, while they can return to normal operating hours in orange zones. In addition, people in dark red zones are urged to cancel interprovincial travel or to submit to strict health screening. Businesses in the private sector are asked to allow employees work from home if possible.