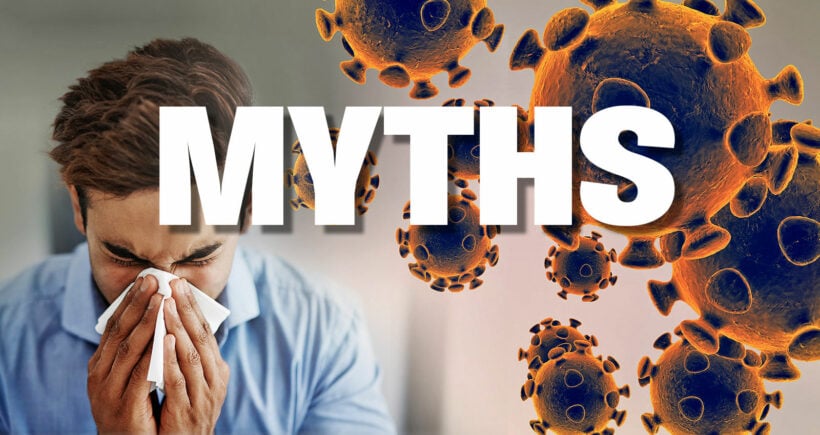 Two months after the first cases came to the attention of the world, a lot more is known about the coronavirus, aka. Covid-19. Here’s a few well established myths and a few scientific facts.

Wearing a face mask is no guarantee that you won’t be infected. However, masks are effective at capturing droplets and larger airborne particles in the seconds after an infected patient has coughed or spluttered – the main transmission route of coronavirus. Some studies estimate a roughly five-times protection versus no barrier at all.

Within health care facilities, special respirators called “N95 respirators” have been shown to greatly reduce the spread of the virus among medical staff. People require training to properly fit N95 respirators around their noses, cheeks and chins to ensure that no air can sneak around the edges of the mask; and wearers must also learn to check the equipment for damage after each use. These are very different than the flimsy paper masks people walk around with.

If you are likely to be in close contact with someone infected, a properly-worn mask limitss the chance of the disease being passed on. If you’re just walking around town and not in close contact with others, wearing a mask is unlikely to make any difference. The cheap, paper masks, often passed out for free by authorities are close to useless.

MYTH: The virus was made in a lab by humans

No evidence suggests that the virus is man-made. But the conspiracy theory has been a popular piece of fake news that keeps popping up in rubbish tabloid and social media. SARS-CoV-2 closely resembles two other coronaviruses that have triggered outbreaks in recent decades, SARS-CoV and MERS-CoV, and all three viruses seem to have originated in bats. Unless there is a gang of super-bats that have conspired to create Covid-19 in their secret cave-lab, there is absolutely no evidence that this has either occurred or would even been possible.

In short, the characteristics of SARS-CoV-2 fall in line with what we know about other naturally occurring coronaviruses that made the jump from animals to people.

MYTH: The virus is just a mutation of the common cold

Wrong. Coronavirus is a large family of viruses that includes many different diseases. All five of the known ‘flu’ coronaviruses have spiky projections on their surfaces and utilise so-called “spike proteins” to infect host cells. However, the four cold coronaviruses – named 229E, NL63, OC43 and HKU1 – all utilise humans as their primary hosts. SARS-CoV-2 shares about 90% of its genetic material with coronaviruses that infect bats, which suggests that the virus originated in bats and later hopped to humans.

Evidence suggests that the virus passed through an intermediate animal before infecting humans. Similarly, the SARS virus jumped from bats to civets (cat-like nocturnal mammals) on its way into people, whereas MERS infected camels before spreading to humans – livescience.com

MYTH: ‘It is no worse or more dangerous than a normal flu’

Many individuals who get coronavirus will experience nothing worse than normal flu symptoms – sniffling, coughing, congestion and felling of illness. But the overall profile of the disease, including its mortality rate, could end up reflecting a more serious profile. This week, a World Health Organisation spokesperson, Bruce Aylward, who led an international mission to China to learn about the virus, noted that cases of the disease are now well exposed, it’s not just ‘the tip of the iceberg”.

If borne out by further testing, this could mean that current estimates of a roughly 1-2% fatality rate are accurate. This would show Covid-19 about 10 times more deadly than currently understood seasonal flus, which are estimated to kill between 300,000 and 660,000 around the world each year.

MYTH: ‘Covid-19 only kills the elderly’

Most people who are not elderly and do not have underlying health conditions will not become critically ill from Covid-19. That’s broadly true given the current cases studied in detail. But Covid-19 still has a higher chance of leading to serious respiratory symptoms, or potentially death, when compared to seasonal flu. There are other at-risk groups – health workers, who are more likely to be exposed to the virus.

The active precautions by communities around the world, to contain the situation in their immediate environment, will automatically be more likely to protect potential at-risk groups, like children. But, statistically, the majority of deaths have been in the elderly and in cases where there have been underlying causes. But there are children and previously healthy adults among the list of people who have succumbed to the virus.

MYTH: ‘You would have to be with an infected person for 10 minutes’

For flu, some hospital guidelines define exposure as being within 2 metres of an infected person who sneezes or coughs for 10 minutes or longer. However, it is possible to be infected with shorter interactions (even seconds) or by picking the virus up from contaminated surfaces (although this is thought to be a less common route of transmission).

MYTH: ‘A vaccine will be ready soon’

Scientists were quick to respond to this new strain of coronavirus, in the same family as the SERS and MERS viruses. Development os a vaccine, helped by the early discovery of the genetic sequence by Chinese researchers, is progressing much quicker than in the past. But a viable vaccine could be a long way off.

Several teams, separately around the globe, are now testing possible candidate vaccines in animal experiments. But the trials required before a commercial vaccine could be commercially rolled out are still at least a year away. Early human trials will also have to wait for possible side-effects and full evaluation.

MYTH: You can catch coronavirus eating at Chinese restaurants

Yes, some people actually believe this. By that logic, you’d also have to avoid Italian, Korean, Japanese and Iranian restaurants, given that those countries have also been facing an outbreak.

You have no more chance of getting infected by coronavirus, or anything else for that matter, at any Chinese restaurant, than being bitten by a giraffe in a telephone box.

I’ve had a dodgy Sweet & Sour Pork once and a Special Fried Rice that wasn’t very special, but I never caught coronavirus.

Early in the coronavirus news cycle there were many, many fake and invalid claims made about the virus. We listed a few HERE.