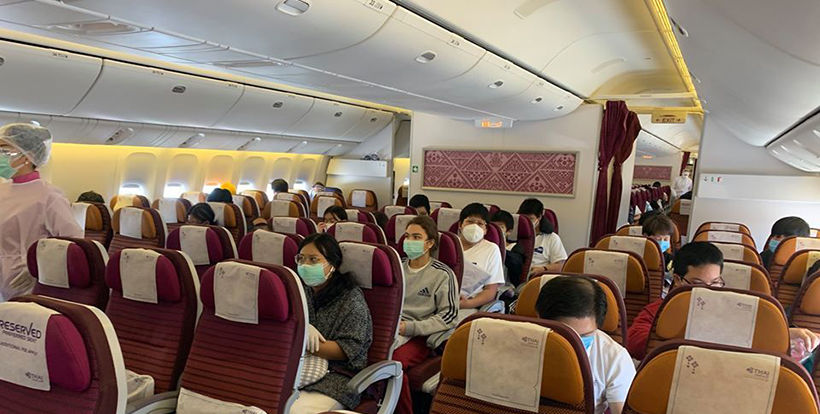 As the world ground to a crawl thanks to Covid-19, things began ramping up at the Thai Ministry of Foreign Affairs, with staff working tirelessly to help Thai citizens abroad get back home. MFA staff are based both in Thailand and overseas and are tasked with assisting Thai nationals during emergencies such as natural disasters or indeed, a pandemic, wherever they are. They will also repatriate their citizens back to Thailand when necessary.

The first repatriation flight originated in Wuhan, China, in February, epicentre of Covid-19 at the time. In an interview with the Bangkok Post, the director-general of the Department of Consular Affairs, Chatri Archjananun, discusses the logistics of repatriation.

“On Feb 4, we came under pressure to evacuate our citizens from the then epicentre of the outbreak. We sought permission from China and sent our staff and doctors by air. Meanwhile, our staff at the Royal Thai Embassy in Beijing drove 1,000 kilometres to Wuhan and did everything at the airport, such as checking in passengers and taking their temperature. It was a blessing in disguise because it was a learning curve and we have a good memory of this mission.”

For Thai nationals a bit further afield, the process is slightly more complicated and more expensive. Those living in Latin America for example, provided a challenge for the MFA.

“The flight from Latin America is expensive and complicated. With Covid-19, we could rarely see a way out, but we still managed to make it happen. Some (of those we repatriated) travelled from Latin America to Brazil to Mexico to Netherlands to Thailand. Others headed for Kuala Lumpur and crossed the southern border of Thailand. We have a lot of sympathy for this group because these flights are not free, except the chartered flight to Wuhan sponsored by the private airline.”

The MFA also works with various world carriers to ensure flights can be used to repatriate people in both directions.

“When India, Italy, and Russia chartered flights to evacuate their citizens, we asked them to bring Thais back. Meanwhile, when we repatriated our citizens from Sydney, we flew 300-400 Australians back home. We are working together during the crisis.”

The logistics of each repatriation mission involves communication between several different government ministries, including the Ministry of Interior, the Ministry of Transport, the Ministry of Public Health, the Immigration Bureau, and the Civil Aviation Authority of Thailand.

“Each ministry sends its staff to clear up unresolved issues at the Centre for Covid-19 Situation Administration. If they remain unsettled, they will be forwarded to the premier. You can see we have streamlined hierarchy, expedited decision-making, and let information flow from a single source.”

Chatri says most Thai citizens working overseas don’t bother to register with the MFA and this makes record-keeping a challenge. However, as a result of last year’s elections held outside Thailand for absentee voters, officials estimate there are around 1.6 Thais living and working overseas. Requests for repatriation must take into account available space in state quarantine. To date, over 83,600 people have been brought back to the Kingdom, part of a daily limit of 600.

“Stranded tourists, the sick, and those whose visas will soon expire are the first group we bring back. Students, monks, and the unemployed are the second group. We also consider other factors, including health risks and fair quotas for all groups. However, no matter how hard we try, we can’t cope with the demand of hundreds of thousands of Thai workers in South Korea and Malaysia because we must help others as well.”

In the early weeks of the pandemic, a solution needed to be found for hundreds of thousands of Thai nationals returning from South Korea, where they had been working illegally.

“The South Korean government requires them to self-report, or they will be charged and blacklisted. This stance encourages them to come back. They have discussed with us the possibility of increasing the number of seasonal workers in the agricultural sector under contract. For instance, they can spend three or four months working there annually.”

Chatri says that despite the challenges involved, MFA workers are committed to helping both their fellow citizens and foreigner nationals return home, but that resources are limited.

“One of Thai returnees said her mother was dying, but the flight quota was already filled. We asked the airline to let her board the flight for emergency reasons to see her mother on her deathbed. She wrote us a thank-you letter, and we posted it on the wall. Some blame us for not picking up calls or using inappropriate words in reply, but we have chosen not to respond. In fact, we have limited resources, including staff.”