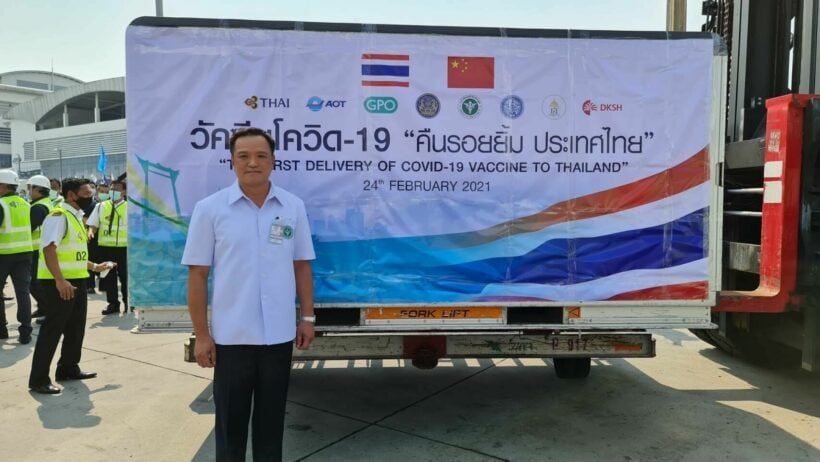 While news has been focused on today’s arrival of China’s Sinovac vaccine, it’s now being reported that 117,000 doses of the AstraZeneca vaccine will also arrive in Thailand today. The vaccines will be distributed to 13 provinces, including 9 that are considered the “highest risk” of Covid-19 infection as well as 4 popular tourist destinations that are of “economic significance” such as Phuket and Chiang Mai.

The delivery of the Sinovac vaccine was widely publicised in Thailand. The public health minister posted photos of the packages throughout the delivery process. The government even held a special event called “Covid vaccines, restoring the Thai smile” where they formally accepted the first delivery of Covid-19 vaccines in Thailand. The Bangkok Post says officials did not specify how many Sinovac doses were shipped, but in earlier reports, the government said they planned for 200,000 doses in the first round.

PM Prayut Chan-o-cha will be injected with the AstraZeneca vaccine rather than the Sinovac vaccine due to his age. A doctor recently warned that the Sinovac vaccine’s efficacy and safety has not been tested in those over 60. Prayut says the 200,000 doses from Sinovac will be given to priority groups within the next 3 days. In previous reports, people over 60 years old in high risk areas were included in the first phase of injections.

Prayut will be the first in the country to get injected with the Covid-19 vaccine, according to Public Health Minister Anutin Charnvirakul.

“It’s important that Gen Prayut takes the first Covid-19 vaccine shot because he is the country’s leader. There will naturally be a risk assessment process by the Department of Disease Control, which is an internationally accepted standard procedure.”