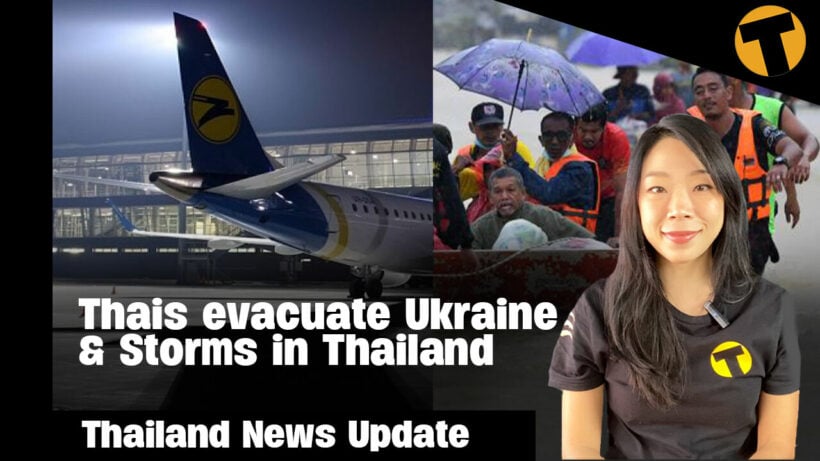 Forty-seven Thais arrived at the help centre in the Ukrainian city of Lviv with more on their way yesterday… this from the Thai embassy in Warsaw, in neighbouring Poland. The embassy, which is making arrangements to evacuate Thais from Ukraine currently under attack from Russian military forces, said 47 Thai citizens reached Lviv, the largest city in western Ukraine yesterday. Thais at cities in other parts of Ukraine have also confirmed they are safe, according to the embassy. They also report there are still around 100 Thais who remain confined to their homes or accommodation within Ukraine due to security lockdowns in a number of other cities.In Ukraine capital, Kyiv, 102 of 148 Thais living there have left already…. 43 having arrived at the centre in the city of Lviv. About 40 Thais say they have chosen to remain in Kyiv with their families, although their husbands were being enlisted to fight in the war. The Thai PM Prayut Chan-o-cha has instructed the Labour Ministry and Foreign Affairs to offer all assistance to any Thais trapped by the conflict caused by the Russian invasion. Meanwhile, in Bangkok yesterday, a group of 50 mostly Ukrainians and Belarusians staged a symbolic walk in protest against the Russian invasion, from Lumpini Park to Benjakitti Park on Ratchadaphisek Road.

Forensic experts have dismissed reports that Tangmo, the young Thai actress who’s body was found floating in the Chao Phraya, went to the back of the boat she fell off, to urinate.Investigators say she was wearing a body suit, which would have made this difficult. A preliminary autopsy showed Tangmo had sand in her lungs. Toxicology results are expected to take about seven days as the investigation of the circumstances of the evening on the boat trip continue to be investigated. Two suspects so far face charges in the case. The driver of the boat Tangmo and five other people were on, and the boat’s owner, already face charges of death by negligence. Police say the two suspects went to police yesterday with a lawyer to acknowledge the charges, and applied for bail. The boat’s driver, Paibul, also faces the charge of driving a boat with an expired license.Tangmo’s mother has also spoken to the media saying she believes her daughter’s death is suspicious. She didn’t believe Tangmo would urinate off the back of a boat. She also said someone on the boat with Tangmo might not have wanted her there, since there was a photo showing Tangmo sitting alone at the back of the boat in a ‘somber’ mood. In earlier interviews, Tangmo’s mum, Panida, told reporters Tangmo had been a great swimmer since she was young.

After an annoyed Public Health Ministry secretary warned patients on Thursday that the anti-viral medicine Favipiravir is “not a snack“, Thailand’s Rural Doctor Society now complains of a shortage of it.Favipiravir is a popular drug given to Covid-19 patients as part of their wider treatment in Thailand, but the secretary said last week that there was a misunderstanding that every Covid-19 patient had to take it. He said this was because the government used to provide it a lot in the past. Now, the RDS says several rural hospitals and community isolation centres have a shortage of Favipiravir following the spread of the Omicron variant.The society said the Public Health Ministry is responsible for dealing with the shortage. It also said doctors should make an effort to tell patients, especially older ones, that hospitals are running low on the drug. But the Government Pharmaceutical Organisation claims there is enough Favipiravir for public demand, and 60 million tablets are in production. It said 24 million tablets remain in stock.On Thursday, the Public Health Ministry secretary said Favipiravir will only be given to patients “if necessary” to patients with moderate symptoms or worse.

Rainstorms and big sea waves damaged about 200 homes in the Southern province of Nakhon Si Thammarat in the latter part of last week and on the weekend.The storms hit the Gulf of Thailand, and drastically eroded about 500 metres of the beach at Na Saton village. The Na Satorn Municipality gave people tiles and roofing sheets to repair their homes. The road along the coastline from Pak Phanang to Hua Sai district was also hit by the waves. Authorities said heavy machines were dispatched to fix the road and beach. Heavy rain is expected to hit twelve Southern provinces…. Surat Thani, Nakhon Si Thammarat, Phatthalung, Songkhla, Pattani, Yala, Narathiwat, Phangnga, Phuket, Krabi, Trang and Satun. Check your local forecasts for the latest information.

A man in Phuket who pretended to be a monk to convince people to give him ‘alms’ donations publicly stripped off his monk robe in a field to change into normal clothes. The Phuket Provincial Police chief noted that several people complained and sent videos of the man publicly changing in a field across the road from the Phuket Town Post Office. The fake ‘monk’ left the area after changing into his day clothes. The man allegedly asked for ‘donations’ at the Phuket Town Fresh Market. A similar incident happened in Rayong on Thursday when seven men posed as monks to ask for money.The men had allegedly seemed like ‘unconventional’ monks because they refused food and offerings apart from money. A local monk reported the men to police, and the ‘monks’ refused to speak to the police. They tried to flee, but police caught them and found the men had fake monk ID cards, and were carrying knives.The seven men were charged with forgery and carrying weapons in public.

The president of Chulalongkorn Univesity’s student council has been removed from his position after he presented a controversial video at a student orientation back in 2021. The video featured talks by two prominent anti-government protest leaders, namely Penguin and Rung, two of the best known critics of Thailand’s monarchy and the government. In his talk, Penguin raised his middle finger, and encouraged students to do the same. The Student Affairs Office called this a “vulgar” gesture, and said it went against Thai culture and therefore could “cause disunity” among students.Chulalongkorn University deducted 10 points from the student council president’s behaviour score, and dismissed him from his position. The Student Affairs Office condemned him for being complicit in the event without telling the office about it first, and for inviting Penguin as a speaker. Penguin was recently granted three months bail from a prison sentence. Thai PBS said Netiwit compared the decision to dismiss him, to a coup.

Evacuation of Thais from Ukraine begins I GMT