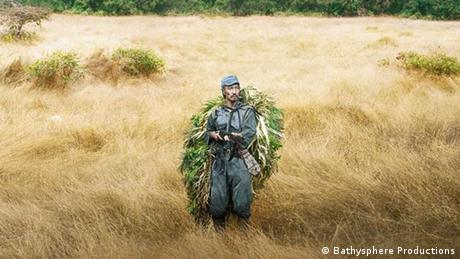 An international production about a Japanese soldier who remained in the Philippine jungle for 29 years after the end of World War II, will make its premiere at the Cannes Film Festival this month.

“Onoda — 10,000 Nights in the Jungle,” which is set to debut on Wednesday, is expected to receive glowing reviews from foreign audiences. The movie will be released in Japan later this year, but is not expected to elicit nearly as much interest as it does abroad.

The film chronicles the experience of Hiroo Onoda, a second lieutenant in the Imperial Japanese Army. Onoda had trained as an intelligence officer before being sent to the island of Lubang in December 1944.

Aware that the war was turning in the allies’ favor, his commanding officer ordered Onoda to resist the impending US invasion. His orders also made it clear that under no circumstances was he to surrender or take his own life — instructions which he took very literally.

Fleeing to the hills

The Japanese defenders were decimated within days of the US invasion in February 1945. Onoda and a small group of survivors then fled to the hills. In the months after Japan’s surrender, the four surviving soldiers decided that every leaflet dropped over the mountains to call on stragglers to surrender were fake.

One of the four men eventually surrendered to Filipino forces in 1950. Two years later, letters were again scattered throughout the jungle to urge them to give themselves up. Onoda was left on his own in 1959 after both of his remaining companions were shot dead in clashes with search parties. It was not until Onoda’s commanding officer, Major Yoshimi Taniguchi, traveled to Lubang on March 9, 1974, to order him to cease operations immediately, that he complied.

Onoda handed over his rifle, along with 500 rounds of ammunition, hand grenades and a dagger. Although Onoda and his colleagues had killed 30 people during their years as guerrillas, he was granted an official pardon by Ferdinand Marcos, a former president of the Philippines.

Upon his return to Japan, the soldier caused a sensation and was held up as an example of the lengths to which loyal soldiers would go in the name of the emperor.

Onoda was, however, disappointed by the Japan to which he returned. He said that traditional values had disappeared in the nearly-three-decades that he had been away, and wrote a book about his experiences, before moving away to Brazil to raise cattle.

Dozens of stragglers held out in remote parts of the Asia-Pacific region in the years after the war, including Sergeant Shoichi Yokoi, who finally surrendered on the Pacific island of Guam in January 1972. Remarkably, the last confirmed former soldier to lay down his weapon was Teruo Nakamura, on the Indonesian island of Morotai on December 18, 1974.

“I was in junior high school when Onoda returned to Japan and I remember it well,” said Yoichi Shimada, a professor of international relations at Fukui Prefectural University.

“The thing that struck me most was that he was upright. He looked people straight in the eye, he looked like a man with the qualities of a soldier, and people were impressed by that,” Shimada told DW.

Onoda’s demeanor was in contrast to that of Yokoi, who had returned a couple of years earlier and cried during a press conference.

“That is not the action of a Japanese soldier to weep in public,” said Shimada. “He was too weak mentally and people were glad to see that Onoda had withstood the tests of nearly 30 years without breaking. His spirit and principles impressed me.”

“Onoda” is a joint production by companies in Japan, Germany, France, Belgium and Italy, and was directed by French filmmaker Arthur Harari. Japanese actor Yuya Endo plays the soldier as a young man, while Kanji Tsuda takes on the role for his later years.

Kaori Shoji, a film critic for the Japan Times, believes it will turn heads. “I think Japan has been off the world’s radar for a few years now but everyone is looking at us again because of the Tokyo Olympic Games and the coronavirus crisis,” said Shoji.

“A movie like this — looking at the war, the experiences of this one man and the reception he got when he finally came back to Japan — is certain to appeal to a lot of people,” she said. “It’s exotic, it has uniquely Japanese elements and I think that at a time when masculinity has gone a bit out of fashion, Onoda’s masculinity and bravery will show through.”

What is the future of democracy in the Philippines?

Dominating delta and an unexpected kiss