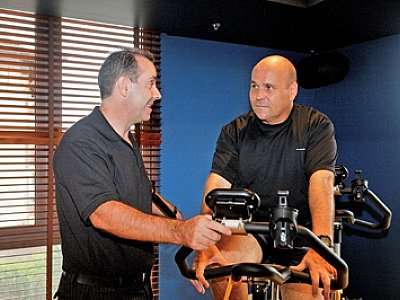 PHUKET: Tim Haddon, Director of Golf at Laguna Phuket Golf Club, is an underdog who has undertaken the challenge of participating in the Laguna Phuket Triathlon (LPT) 2011, which will take place in Phuket on 27 November.

Here, ‘Tri Tim’ tells us what it’s like to be training for his first triathlon. His story needs to be read in the context of his background and health issues, which are provided here.

At the start of this adventure, I had never trained for anything other than golf, and I had no real background in any of the three disciplines which comprise the triathlon.

Learning that I can swim two kilometers was a huge milestone, and completing my first 55km bike ride was another revelation. But the biggest challenge was the Layan/Naithon hills that make up the first 20km of the LPT bike course. I knew that my training in the gym, namely spin classes and weight training, prepared me for the task of making it over the 15km hill section, but it was not yet tested.

Nineteen weeks after my first session, the time had come. Sparing me a sleepless night, Darren [Hancock, manager of the Royal Phuket Marina Health Club] hit me with the news when we met for our training ride last Sunday afternoon.

We had a 20km ride to get to our starting point, the foot of the first hill, which gave me plenty of time to prepare mentally. We stopped at the base of the hill to talk about how I would do this, which basically consisted of “whatever you do, don’t stop pushing”.

With my head down and tail up, what seemed like a very short period was actually six minutes out of the saddle. I was stoked, but with four hills to go, I was still apprehensive. Surprisingly, the hills all went by very quickly, including the last long climb that took me out of Naithon Beach.

Once that was conquered, a weight dropped off my shoulders: I knew I was able to do this. I think Darren also realized the significance of me conquering the hill section on my first time out.

My body has never been through this type of training regime, and other than the normal aches and pains associated with such rigorous exercise, a continuing nagging knee pain was the only thing holding me back.

Darren asked me to see an osteopath who told me that I have Patella Femoral Syndrome, a common complaint for runners where the underside of the kneecap becomes rough and does not track properly over the femur, causing pain for days following a training session.

Darren has now adjusted my training to include more time on a cross-training machine, which simulates running without severe impact. The plan is to look after my knee as much as possible, and to run as far as I can on the day of the triathlon.

From the very beginning Darren has adjusted my training routines to incorporate plenty of rest when it’s needed to avoid serious injury. With the tight time line leading up to this event, a serious injury would most likely mean I wouldn’t get to race.

Another setback is that I keep falling off the bike when I stop. This is frustrating, as I should know when to unclip the pedals. My latest grapple with gravity was at the Heroines Monument last Sunday in front of a large crowd.

Darren consoled me by telling me that there are only two types of serious bike riders, those who have already fallen off, and those who will.

The most obvious benefit is that I feel a lot more fit and stronger from week to week, which is having a positive impact on both my energy levels and my outward confidence.

Clearly, with this much training I don’t have a lot of free time. On top of my 10 hour plus working day, I’m training up to nine times a week, but it’s all worth it. My family doesn’t see a lot of me, but they are also seeing the benefits of this journey.

Gradually, Darren increases the rate of training so that I get the same feeling of fatigue after a session, but I’m riding further, swimming further and lifting more weights. He always says, “Train hard to race easy”. For example, our weekly bike rides now exceed 55km (the distance of the LPT bike leg). In the weeks to come we will be doing the full bike course twice in a single session.

I don’t want to give myself any reason to fail, so I have followed Darren’s training program quite rigorously, except when I have to travel. Even then I make sure I do some kind of exercise.

Confidence in facing the LPT

Darren’s training has increased my confidence to an all-time high, but there’s a certain nervousness that I will have all the way up to the starting gun, that only race experience can alleviate. What’s it like swimming with hundreds of other people? Will the transitions be chaotic? Will I come in last?

With this in mind, I entered a slightly shorter Olympic distance triathlon in Hua Hin during August with Darren and some other Phuket-based triathletes.

This gave me a chance to test myself in race conditions in an easier event away from the spotlight of Phuket.

Darren, rightly so, thought it would be a good idea to test a bit of the swim course the day before so that on the race day I would not be entering the ocean for the first time ever.

Only 300 yards into this practice swim I got stung quite badly by a jellyfish and spent the afternoon in the hospital. I couldn’t race the next day, which was disappointing, but gladly the rest of our group successfully completed the race.

I’ll have to learn through Darren what it will be like on race day.

Although he’s now an experienced triathlete, there was a time when he made all the same mistakes that I am making now, which makes him the perfect coach.

The Laguna Phuket Triathlon and the ‘Tri Tim’ training project are sponsored by the Royal Phuket Marina Health Club and the Phuket Gazette.

Phuket Comedy: A funny thing happened on the way to Patong