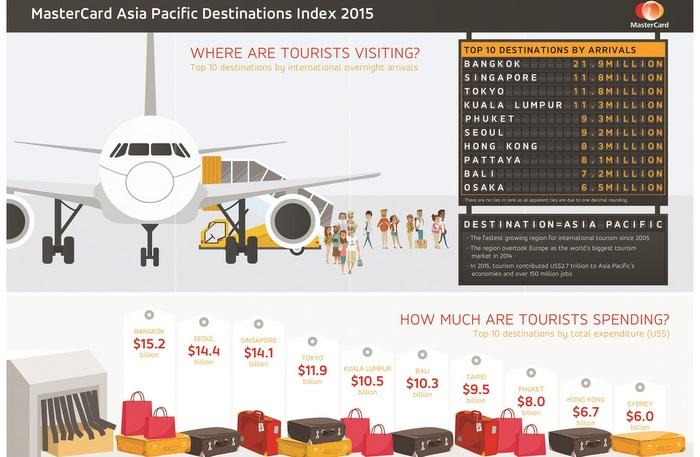 PHUKET: Last month, MasterCard Asia Pacific Destinations Index 2015 announced that Thailand is the most popular regional travel destination for 2015, with three of its cities making the top ten list. Bangkok was the most popular, followed by Phuket in fifth place and Pattaya in eighth.

The survey was based on 167 destinations from 22 countries across Asia Pacific and represented 90.1 per cent of all international overnight arrivals in the region. The Airport Authority of Thailand (AoT) also saw a 21.3 per cent growth in passenger traffic for 2015 through its six main airports. The AoT expects this growth to continue through 2016.

With the much awaited Phuket airport expansion, due to be completed in March 2016, effectively doubling its annual capacity from 6.5 million to 12.5 million passengers, 2016 will no doubt be another busy year for Phuket. The roadworks infrastructure development currently being undertaken throughout the island is unfortunately growing at a much slower pace. With ongoing roadworks cutting right across the heart of the island, along with road closures and traffic diversions, Phuket remains mired in traffic chaos. No doubt, the island needs all these developments in infrastructure to support its growth, but it’s proving to be a slow and painful process.

Residents and tourists alike are spending more time travelling around the island, and a trip to the airport must now be planned carefully in advance, or the result will surely be a missed flight. This inconvenience to Phuket’s residents and visitors is increasingly being likened to the infamous traffic jams in Bangkok. However, Bangkok now has an integrated mass transit system comprised of the Bangkok Transport System (BTS) and Mass Rapid Train (MRT) which alleviates the problem to a certain extent. Phuket, on the other hand, will have to wait for another ten years at the very least, for the proposed light rail system to become a reality.

In view of the current situation and the future construction of infrastructure around the island, property buyers must be very careful about the location in which they are looking to buy a property. Certain locations around the island could see years of construction ahead, especially if the light rail system comes to pass, which would mean more traffic jams, road diversions and flooding. This eventually will make selling a property in those locations harder and owners would end up having to offer large discounts on the property just to dispose of it.

The same can be said of long term residents who must now seriously consider moving or renting properties closer to schools or work places rather than endure the long drive time between home, school and work. Rental properties closer to schools may now fetch a higher rental income due to increased demand from parents looking to relocate. With the next new school term starting in April 2016, for many parents the hunt for a new rental property is beginning.

Amy Koh is the sales manager of Engel & Voelkers Phuket. To contact Amy, or for more information, visit www.engelvoelkers.com/en/phuket

Ditching a brand for better marketing