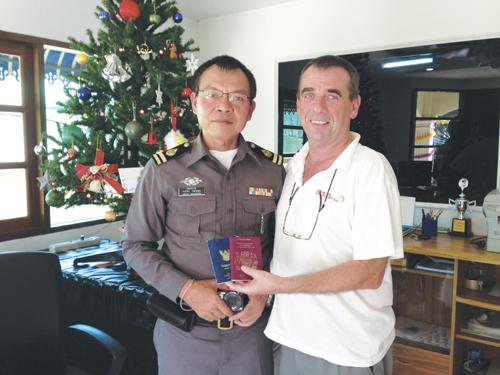 ” ‘Twas the day before Christmas and all was calm at the 91.5 FM studio in Kathu, with nothing to be heard but the occasional tuk-tuk and the odd tailor offering to make a suit, ‘Special price for Christmas, Sir’. The afternoon show hosted by The Doris was in full swing….”

PHUKET: Then there came a knock at the door. “Is this Santa with my Christmas bonus?” asked The Doris.

“Not possible,” replied ‘the man that does not speak’.

And there behind the door was Santa Claus in disguise, fully dressed as an official from the Phuket Labor and Employment office.

“I have come to check all your staff credentials,” he politely explained and was invited into the office.

‘She who must be obeyed’ duly provided everything required. Even The Doris (who always carries his credentials with him) was able to satisfy the officers.

After a short period of photocopying and picture taking, they climbed aboard their very special Santa sleigh, disguised as a Toyota mini-bus, and went on their way, no doubt seeking mince pies and festive spirits.

Christmas day arrived and with it the ghosts of Christmas past in the form of three DJs: Garry Holden, Paul Norris and Gerry Mitchell.

All was calm in the realm of 91.5 FM, when all of a sudden there was another knock on the door.

“Who can it be this time?” asked ‘the man that does not speak’.

However, opening the door 91.5 FM was delighted to see it was Santa and his helpers again, only this time dressed as officers of the Phuket Immigration Department.

“Two official visits in two days?” ‘She who must be obeyed’ inquired… and both around the Christmas holiday?”

“No worries,” ‘She who must be obeyed’ retorted and proceeded to produce all the same paperwork and photocopies from the Christmas Eve visit.

“Excellent, and sorry for disturbing you on your Christmas Day,” came the response after a short while. “We will be on our way”.

The three immigration officers climbed aboard their sleigh (also disguised as a Toyota mini-bus) and went on their way.

The Doris returned to his Special Christmas Day Show, “Still no bonus…,” he was heard mumbling.

Gerry arrived in preparation for his special Sunset Sounds show and ‘the man that does not speak’ sat contemplating life and the universe and wondering about coincidences.

All was calm and peaceful and goodwill spread throughout the realm of 91.5 FM.

— The man that does not speak