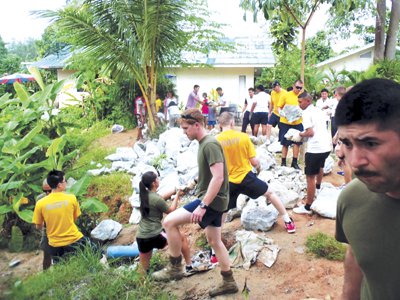 PHUKET: THE USS Peleliu returned to Phuket recently and conducted the US Navy’s 100th Community Service Project in the greater Phuket area.

In June 2006, the Rotary Club of Patong approached the US Navy Attaché’s office in the US Embassy in Bangkok about doing community service projects together with the US Navy ships that visited Phuket for rest & relaxation.

The embassy was looking for just such an opportunity in Phuket to organize both the US Navy’s COMSERV and HANDCLASP projects and so began a long relationship that still exists today.

Since then, 100 COMSERV projects have been performed by more than 40 different US Navy ships which have visited Phuket over the past six years. The USS Peleliu conducted the 100th COMSERV project on October 23, over the Sarasin Bridge at the Home & Life Foundation Orphanage, where 26 Tsunami-affected and/or disadvantaged children currently live.

The foundation owns several buildings including dorms, offices, a bakery and coffee shop. Their property is beside a river that has eroded land and threatened the foundations of the bakery and several other buildings.

Over the past year shoring up the river bank has been accomplished through generous donations from the Rotary Club of Patong Beach and with US Navy and Marine manpower from several past COMSERV’s including the USS Comstock (LSD-45), USS Green Bay (LPD-20), USS Kidd (DDG 100), and the USS Ford (FFG 54), and most recently the USS Peleliu.

Previous efforts stopped erosion and this project worked to reclaim lost land. The land that was reclaimed was then used to build a play area for the children.

On October 24 a second group of USS Peleliu Marine and Sailor volunteers went to Baan Ao Makham School near Kok Kloy and did some much needed painting.

The USS Peleliu (LHA-5) is a Tarawa-class amphibious assault ship, named for the Battle of Peleliu during World War II. The Peleliu has previously visited Phuket in 2006 and 2010, when it participated in other community services. Projects by the ship in greater Phuket now total seven.

The average cost invested by each COMSERV project is 12,000 baht, making the contribution by the US Navy to-date a total of 1.2 million baht. COMSERV usually involve 25 US Marine and Navy volunteers, a total of 25,000 US enlisted personnel who’ve volunteered in Phuket.

Another project of the US Navy is HANDCLASP. This project gives goods to organizations in need at the local communities where servicemen visit. These goods usually include medical supplies, personal hygiene supplies, and sports equipment. The US Navy has to-date completed 37 HANDCLASP projects averaging 60,000 baht each, totaling over 2.2 million baht given to children and women’s shelters, day care centers, orphanages and NGOs.

Just over the bridge off Phuket is an orphanage started after the 2004 Tsunami with 26 children living as a large family, with five care takers, making a wonderful family unit: the Home & Life Foundation, Phang Nga.