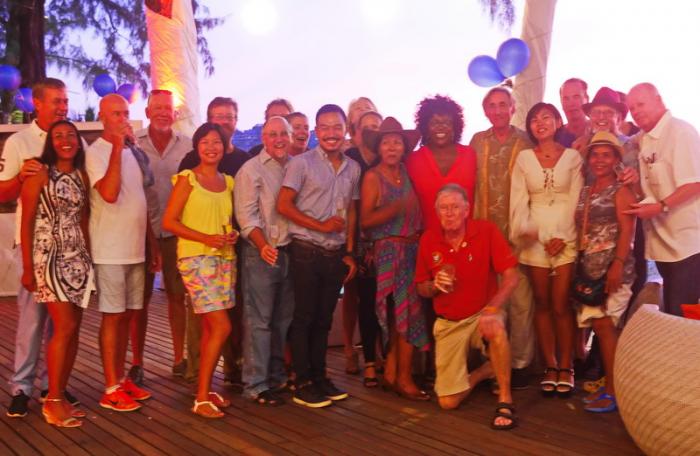 PHUKET: For half a decade Texan soul singer Peejay Stanley has been entertaining Phuketians with a larger than life stage presence guaranteed to get audiences on their feet.

Peejay’s singing style has been described as similar to Joan Armatrading, Tracy Chapman and Nina Simone, but she is probably best described as a motown, soul and blues artist with a voice like Gladys Knight.

Peejay and her husband, also an American, arrived with plans to settle as permanent expats in Phuket. Last week, however, the island’s best-known soul sister put on a farewell performance ahead of her departure for greener pastures in June.

Peejay first came to Phuket in January 2011 to explore the possibilities of live music. She and her husband; a teacher at an international school, had been living in Saigon, Vietnam and both were looking for something new.

“There’s no really good live music possibilities in Saigon. They are into deejays and electronic music but there’s no place for live music as there are not many expat musicians.”

Peejay threw herself with gusto into her Phuket project. She quickly became acquainted with established musicians and music producers on the island, arranging jam sessions and exploring openings for live music at resorts. Her professionalism has been a large part of her success, tackling the music scene with a unique blend of business acumen, determination and a bubbly, contagious smile.

“It’s been fantastic. Not only are there a lot of expat musicians, they get the music I do. Like motown, the Beatles, the sixties thing…”

“The hoteliers I met with also understood the value of live music, and had budgets for it, so that was the beginning of my live singing in Phuket.”

Peejay did everything by the book from day one but five years on and the legislation of staying legit has become ‘more of a pain’, hence her and her husband’s joint decision to move on, despite wishing they could stay.

“It’s getting harder to stay. Every time I renew my visa there are changes and new rules to follow that are new to the lawyers and accountants as well. Those changes cost money; 6,000 baht here, another 30,000 baht there. The money I do make has to go out to a lot of other people but it keeps getting eaten up… There’s always something new to be booked for.”

“We are going to miss Phuket a lot – the food vendors, the dogs, the smiles – but I need to go some place where I feel wanted. That shows up in [a country’s] legislation, when for example, you can buy property.

Peejay’s final performance on the island was a farewell do at Bliss Beach Club, which turned into a jam session as local musicians took the opportunity to join Peejay on stage one last time.

But the music doesn’t stop there. For the past few months, Peejay and her band have been working with Phuket-based music producer Gary Crause (Phuket Academy of Performing Arts) to lay down tracks for 90 songs that Peejay can take with her and use as unique and original backing tracks for future live performances. Some of the songs have been turned into music videos and CD albums.