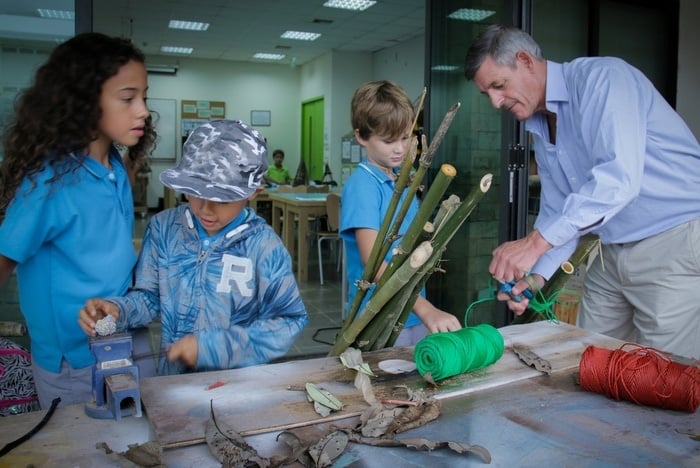 PHUKET: Standing alongside eager students, the Chief Executive of Phuket International Academy (PIA) has started demonstrating how to build a bamboo shelter. As he knots the rope around two bamboo sticks, Julian Whiteley explains to the children how the hut will provide protection from the elements.

His 30-minute lesson on basic survival skills cannot be taught properly in a classroom. It is an outdoor skill – something that can help children develop both mentally and physically.

“Outdoor education is going to play an increasing part in the program we offer,” Julian says. “From the point of view of any prospective employer, they want people who can think critically, analyze situations, solve problems and generate creative solutions which they can then communicate by a variety of means to others. They also want people who have the ability to nurture, develop and sustain relationships.”

Julian has an extensive background in the education world. He has worked in a variety of schools in Europe, South America and Asia. He served on the Board of the East Asia Regional Council of Schools, and was a member of the International Baccalaureate Heads Council and the United World Colleges Council.

“The reputation and standing of UWC is such that to become a member of UWC would be a reflection upon the quality of the school and our ambitions, but also a tremendous asset for Phuket,” Julian explains. “The reason being is that it would attract people to come and establish their families in Phuket, even if their work was based in Shanghai, Hong Kong, Singapore or Jakarta, to name but a few cities”.

Each year, more than 1,000 students are awarded scholarships to attend one of the 14 UWCs across the world. Julian hopes that in six to seven years, 40 per cent of PIA’s students in the senior classes will be on scholarships.

“One of the focuses of us becoming a UWC in Thailand will be very much about the students engaging with the local community,” says Julian. “We want students from all parts of the world to come here and interact with the local population, so they learn about and understand the Thai culture and beliefs. We want them to be proud of the fact that they have been part of Thailand and go out as ambassadors
for the country.”

Woolf in shepherd’s clothing: Renowned clairvoyant stops in Phuket for a “look’