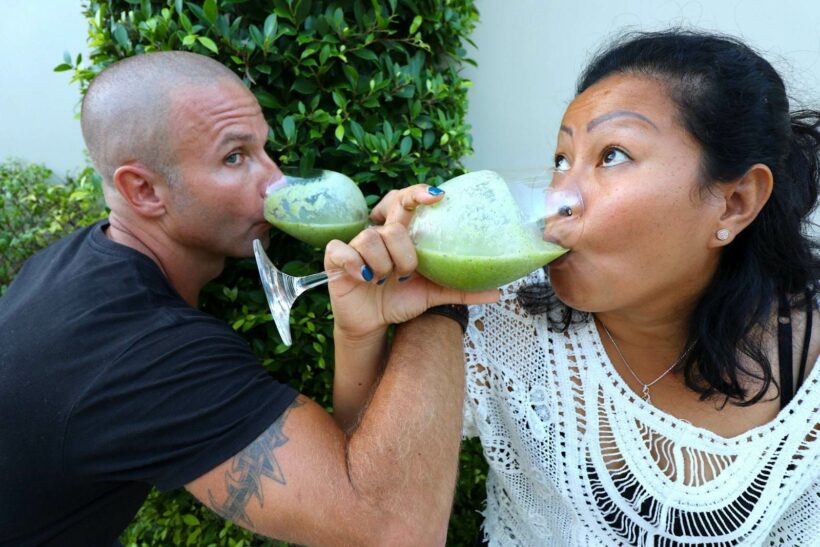 Putting yourself out there in the uncertainty, and exposing your raw vulnerability is downright scary. Who said charging after your dreams with courage and conviction was going to be EASY?

Starting your own business and making a vision become a reality requires an enormous amount of patience, persistence and perseverance. It’s so easy to double down on fear and what’s happened to you in the past. It’s so much easier to just be a dreamer and not a DOER.

Courage is the great equaliser that doesn’t hold you hostage to your past.

Annie shared with me her 3 secrets of starting Coffee Tribe Phuket and how we can all add a little more courage and conviction into our lives:

• Why? You need to be brutally honest with yourself and ask this very important question: Why are you DOING this? This is where honesty and self awareness will build an absolute rock solid foundation.

• Passion trumps money for chasing after success. Success isn’t something you get; its something you bring. It’s time we start reevaluating success and failure.

• Are You Ready? There will be an enormous amount of disappointment and an overwhelming sense that you can’t trust yourself. You have to be willing for the brick walls. The brick walls are not meant to keep us out but to challenge us… “How bad do you want this?”

There is only one person who can answer this question.

Making your dreams a reality requires an enormous leap of faith. You are going to run into the brick walls and acquire a few new shiny blisters. Annie also pointed out that in the first few years of starting Coffee Tribe she had countless nights of no sleep, an incredible amount of stress and lost sight of her ‘Why’. Annie ran out of fingers on her hands with all the times she wanted to quit and cash in her chips.

The dots are never going to connect and make perfect sense.

Let’s look at your track record up to this point in your life. Have you been able to handle everything that has come your way? What makes you so certain that you will not be able to handle the brick walls?

Head to Coffee Tribe in Rawai to experience Annie’s dream.

Who is winning the battle between your two wolves?

Cooking food at home more? Most Thais are during Covid-19 FILE PHOTO: Ramen noodles again? More people are eating in because of Covid-19.

Are you an excellent chef? Did Covid-19 force you to learn how to cook food? Or maybe it caused you to pay closer attention to how healthy, how clean, and how well packaged your food is? A new Suan Dusit Poll found that Thai people are eating healthier and eating at home as a result of the Covid-19 pandemic. The poll, conducted last week by Suan Dusit Rakabhat University, asked 1,192 people about their eating habits.

The poll found that nearly 76% of people were cooking at home more often and 71% responded that since Covid-19 they have paid more attention to the importance of food. Only 3% said they pay less attention to their eating since the Coronavirus outbreak.

Most of the poll answers aren’t too surprising, with lockdowns forcing more home meals, and fear of a contagious virus creating more awareness of hygiene practices. Nearly 48% of those polled believed that healthy eating helped against the Coronavirus while 38% were unsure. Nearly 50% were interested in knowing about foods that could build a Covid-19 resistance.

60% of those surveyed said they were choosing more healthy food, and 56% paid closer attention to the importance of food packaging. Somewhat surprisingly, 39% of respondents said they were spending more on food during the pandemic, about 37% said the amount was unchanged, and nearly 24% spent less money.

Food spending in Bangkok averaged 268 baht a day, while other provinces averaged 207 baht, creating a national daily food spending average of about 227 baht.

So how do Thaiger readers compare? What are you spending on food – more or less? Are you eating healthier? Are you dining out less? Perhaps some have become experts at cooking the #1 food in the world? Any recommendations for superfoods that ward off Covid-19?

The Thaiger looks forward to your responses in the comments on this story. 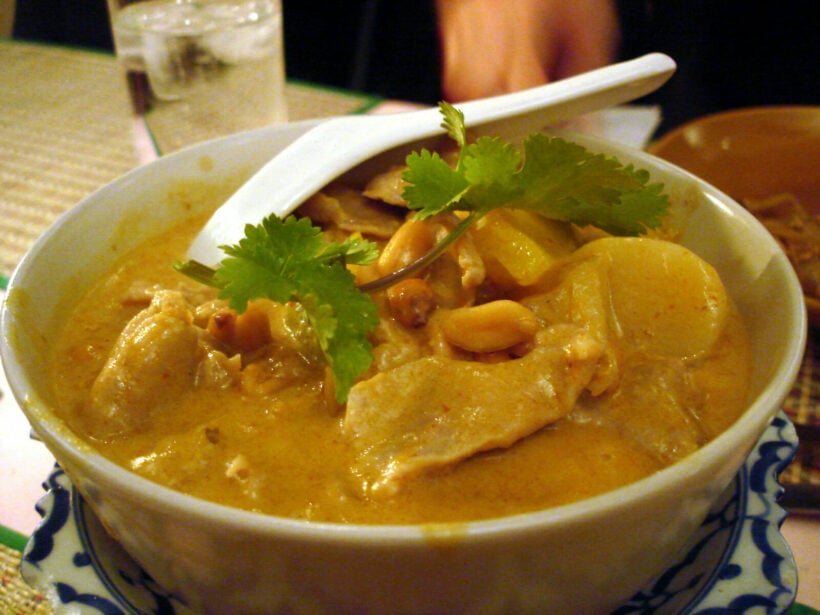 Massaman curry has once again topped CNN Travel’s list of the World’s 50 Best Foods, with 2 more Thai dishes gracing the list. CNN Travel first published its list of the best meals and snacks from around the world in 2011 and just updated it this month. Massaman curry – which the list described as spicy, coconutty, sweet, and savoury – once again ranked number 1, a distinction that the Tourism Authority of Thailand was quick to pounce on and tout to the world.

“TAT would like to remind all of you to stay safe until the COVID-19 situation improves, and prepare for the time when travel and tourism returns, and we can all embark on a culinary journey and explore Thainess through Thai dishes in unique destinations across Thailand.”

Thailand’s reputation as a foodie destination is only growing with this list being evidence that Thai cuisine competes not just as delicious street food, but up to and including 5-star dining experiences.

Thailand’s culinary pride is justified though, as massaman curry is joined by tom yum kung ranked 8th on the list and som tam squeezes in at number 46 on the top 50 list. Tom Yum Kung, was lauded for the variety of flavours, encompassing spicy, sour, sweet and salty, and for how a dish filled with shrimp, tomatoes, mushrooms, galangal, kaffir lime leaves, and lemongrass could be found inexpensively.

Massaman curry beat out pizza for number 1 and managed to finish ahead of such global staples as hamburgers (#6), doughnuts (#14), lasagna (#23), Vietnamese pho (#28), fish ‘n’ chips (#33), and taco (somehow ranked at a lowly 43rd?!) for the top spot. CNN Travel called it the “king of curries” and said even home packets of massaman powder can turn anyone into a gourmet chef.

The top 10 was rounded out by (from number 2 to number 10) pizza, chocolate, sushi, Peking duck, hamburger, Penang assam laksa, tom yum kung, ice cream, and the African nation of Gabon’s chicken Muamba. Other notable entries include corn on the cob at #13, lobster at #17, shish kebab at #18, croissants at #21, Indian butter garlic crab at #23, Filipino Lechon pig at #27, Canadian maple syrup at #34, hummus at #36, and poutine at #44.

Snacks popcorn and potato crisps a bit surprisingly made the list (or chips as CNN called them) at number 50 and 48 respectively. But perhaps in a move to remind readers to take the list with a pinch of salt, no pun intended, ketchup sauce was somehow listed as the 39th most popular food in the world.

Full list can be found here. What do The Thaiger readers think? 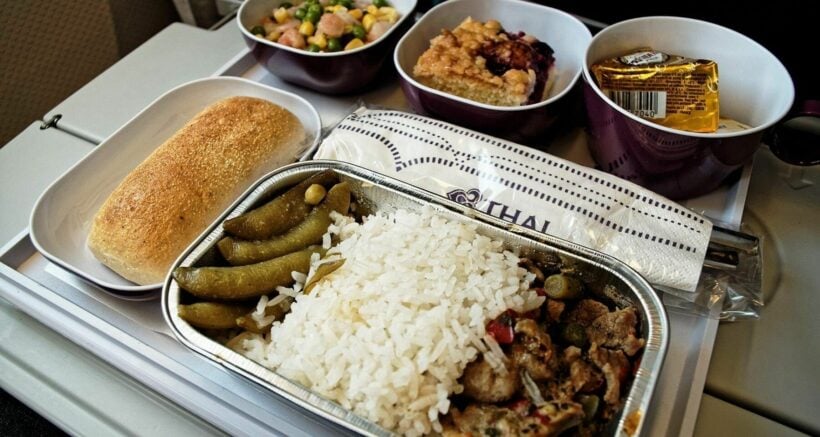 PHOTO: Yum yum, it's airline food 'on the go'

Warning. Some low-altitude turbulence is coming to a 7-Eleven near you. Thai Airways has cooked up a new money-making scheme during Covid-19 to sell its airline food in 7-Eleven. Set to take off on April 15, the mostly grounded and indebted airline will attempt to offset its losses during the pandemic by selling food in the ubiquitous convenience store and other supermarkets throughout Thailand.

It’s a clever strategy for a struggling company, but will customers take the bite? Surely a few crispy pork and rice dishes will knock the edge of that 300 billion baht debt!

Claiming that their busy flight schedule has always previously stood in the way of the airline’s foray into the fast food market, Thai Airways now has the supply (and time) with most flights grounded by the pandemic’s decimation of the travel industry and less hungry mouths to feed in the sky.

The first meals schedule to arrive on the shelves of 7-Eleven just after the Songkran holiday are Thai Airways’ halal chicken biryani dish, and the traditional Thai dish nam phrik long ruea, crispy and fluffy fish and sweet pork served in a fermented shrimp chilli paste. The primary push into the food industry will be more unusual meals to stand out in 7-Eleven’s selection.

The question remains whether the food selection will fly off the shelves, but the airline’s hopes are high after their airline launched pop-up restaurants in September and the public ate it up. It seems that, contrary to a million stand-up comedy jokes about how terrible airline food is, people have really missed it with so much cancelled travel due to border closures and restrictions.

Thai Airways hopes this creative departure from their main business will help bolster the struggling airline, who were previously denied a government bailout after declaring bankruptcy last year. They have tried everything from the pop-up restaurants to jumbo yard sales to renting out flight simulators. Even with the sharp reduction of flights due to the pandemic, flying will still be the company’s main mealticket, but they hope meal sales will make up for low ticket sales until the travel industry recovers.

So stow your tray table and fasten your seat belt as we see if the 7-Eleven offerings of Thai Airways’ food takes off.

(The Thaiger has a better solution. Let 7-Eleven lease Thai Airway’s grounded planes and run the whole business instead)