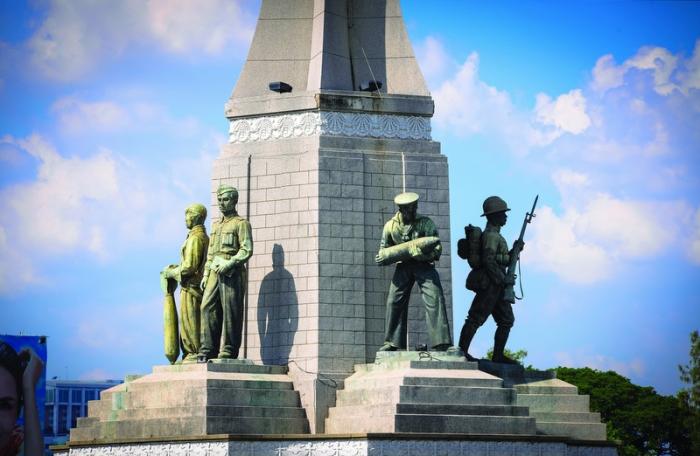 PHUKET: People who live in Bangkok are probably familiar with the Victory Monument. For those visiting, however, there is a good chance you will spend some time stuck in traffic in this famous circle, and this might cause you to contemplate what it commemorates.

One of Bangkok’s iconic landmarks, the Victory Monument is located at the intersection of Phahonyothin Road, Phaya Thai Road and Ratchawithi Road.

The design of the monument is strange at first sight. It looks like an Egyptian obelisk, pointing sharply into the sky. But it was actually designed to look like five bayonets clasped together, as a symbol of military victory. Four military figures, representing the army, navy, air force and police, guard the four sides of the monument.

Most Bangkok residents know the monument well. They know to avoid it because of the horrendous traffic in the roundabout. BTS sky train passengers traveling toward Mo Chit will see a clear view of the monument as the train approaches the station named after it. Victory Monument – everyone knows its name, but few know the victory it commemorates.

To understand why the monument was built requires a bit of background history. During the reign of King Rama V, toward the end of the 19th century, Thailand, then known as Siam, was severely threatened by French colonial ambitions in Indo-China. The French had already annexed Vietnam and large parts of Cambodia.

In 1892, the French demanded that Laos, a region west of the Mekong River, then Siamese territory, be handed over to French control. They sent an envoy to the Siamese court in order to negotiate the handover. The Siamese, believing that the British would help them in resisting French colonial ambitions, refused to cede Laos.

Tension continued to rise and skirmishes between Siamese and French troops on the Laotian border escalated the conflict further. On June 5, 1893, Siamese troops ambushed a Vietnamese militia commanded by French Inspector Grosgurin, who at the time was confined to his sick bed in Kien Ket village. The ambush resulted in the razing of Kien Ket village, the killing of Grosgurin and the death of 17 Vietnamese soldiers.

The death of Grosgurin further soured Franco-Siamese relations to an all-time low. In France, political leaders called for hard action against the Siamese and reparations. In July 1893, the French sent two of their warships, the Inconstant and the gunboat Compte, up the Chao Phraya River toward Bangkok.

When the French vessels reached Paknam Fort, the Siamese fired their guns. The French returned fire and managed to break through the fort’s defenses unharmed. They sailed into Bangkok and stopped in front of the Grand Palace, the residence of King Rama V, guns aimed at the palace interior.

The French delivered their ultimatum to the Siamese on July 20, 1893. Hand over the Laotian territory west of the Mekong River, withdraw all Siamese garrisons from Laos, pay the French an equivalent amount of two million francs as reparation for the Paknam incident, and punish the officers involved in the earlier incidents that resulted in French deaths.

When the Siamese did not immediately comply with the demands, the French proceeded to blockade the mouth of the Chao Phraya River. At this point it seemed unlikely that the British were going to intervene to help Siam. On October 3, 1893, the Siamese agreed to the Franco-Siamese Treaty, in which they accepted all of France’s terms unconditionally. In doing so, Siam lost almost 40 per cent of its territory overnight.

Fast forward to the year 1940 when the French still controlled Laos, Cambodia and Vietnam but back home the fate of the French nation was in danger. In Europe, France and Great Britain declared war with Nazi Germany in 1939 when the Nazi’s invaded Poland. In 1940, the Nazis invaded France and won with surprising speed. In a matter of months Hitler was in Paris and the French government had collapsed.

The Nazis realized however that although France was captured and under Nazi control, a vast overseas empire could join Britain in the war effort if the French government were completely dissolved. Hitler therefore set up Vichy France, a puppet French government that nominally controlled the south of France, a part that was not formally annexed by the Germans.

In Thailand, Field Marshal Plaek Phibunsongkram, the prime minister, was well aware of how weak the French had become. In the eastern theater of the Second World War, the Thai government under Field Marshal Phibun had grown to become quite friendly with the Japanese, and the French foreign forces in Indo-China were cut off from their home government, ill equipped and demoralized.

Phibun used this as an opportunity to invade Laos and reclaim land that only a few decades ago rightly belonged to Thailand. The Royal Thai Air Force began conducting bombing raids over Vientiane, Phnom Penh, Sisophon and Battambang. The conflict quickly escalated with clashes on land and at sea. In January 1941, Japan stepped in to mediate. An armistice was signed and negotiations began. The Japanese, favoring Thailand, coerced the French to relinquish their hold on the disputed territories. As a result, the French ceded Battambang, Pailin, Siem Reap, Preah Vihear and parts of Luang Prabang to Thai control.

At home this was seen as a great triumph for the country and a personal victory for Prime Minister Phibun. Nationalist fervor was at an all-time high. Finally, Thais had won against the French colonialists and had managed to reclaim the lands they had lost many years ago. Amid the national celebrations, Phibun commissioned the building of the Victory Monument in order to commemorate this great victory.

The Second World War would not end well for Japan. In August 1945, with Nazi Germany defeated, the Japanese surrender followed, and the British and French resumed their control of territories in southeast Asia as they had had it before the war.

In October of 1946, Thailand was again forced to return the territories it had gained during the war of 1941 to French Indo-China. Today these territories remain parts of Laos and Cambodia.