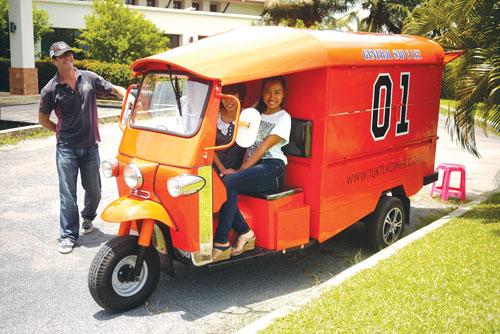 PHUKET: We love them, we hate them, we can’t live without them (or can we?) – tuk-tuks have been getting a lot of bad press in Phuket recently. But all that is about to change thanks to Tom Somsanuk, better known as Blue Wave Radio’s DJ Tank, and his new business idea – the Tuk-Tuk Diner.

“In the States we have diners, where you have your burgers and fries with friends, but I couldn’t find a diner here. There’re street food carts, noodle carts and they are great too, but I wanted a diner. So I thought I’d make a miniature diner, a late night venue for clubbers,” he explains, adding “My dad used to do food carts and food trucks in the 70s and 80s in America, so this is our version of it.”

And it has America written all over it, starting with the two Tuk-Tuks in the fleet – a blue one named the Munchy Machine, after the Mystery Machine from the Scooby Doo cartoon, and an orange one going by the name of General Sab E-Lee after General Lee from the Dukes of Hazard and meaning “very delicious!” in Isaan dialect – and ending with the menu.

“The menu is simple, the Tuk-Tuk cheeseburger is beef and cheese with tomato and lettuce. We have a bacon double cheeseburger, hot dogs with chilli and cheese, and we have something called the ‘All-nighter’ which is a spicy pork sausage sandwich with bacon and egg, crispy, yummy. The onion hash browns or chicken nuggets are awesome too,” exclaims Tom. “It’s comfort food that you can enjoy with your friends,” he adds.

I begin my tasting with the chilli, deep red in color, thick, with fat glistening on the surface. I cover my fries with some, take a bite… and lick my fingers. And I go for another bite, and another. It fills my mouth with the greasy, spicy sensation that makes your mood fly high and your heart beg for mercy. Same goes for the burger – with every bite, my smile gets wider and my arteries get narrower. The nuggets are as crispy as they get and the hot dogs put the ones from 7-eleven to shame. And keep in mind I’m tasting all this in the scorching midday sun. Imagine having this stuff late into a night of partying, dancing and drinking? Count me in!

And that’s exactly where Tom sees his new Tuk-Tuk fleet performing at its best – outside of the nightlife venues of Phuket, deep into the night or even early morning hours. A spot to take a break from clubbing and replenish your energy supplies with a savory bite. “I’m aiming for people living in Phuket looking for something different, something high quality and made fresh every day. I wanted something good, fresh and Western.”

And Western it is – although knowing that most Westerners living on the island manage to get used to a bit of spice in their food, Tom doesn’t skimp on chilli. After all, this food is supposed to keep you going late into the night. And if a fat-dripping, mouth-watering “All-nighter” won’t do the trick, nothing will.

For more on the Tuk-tuk Diner, watch ‘Phuket Today’, the island’s only national television show, broadcast daily on True Visions (channels 85 and 59) and KDTV Channel 4.