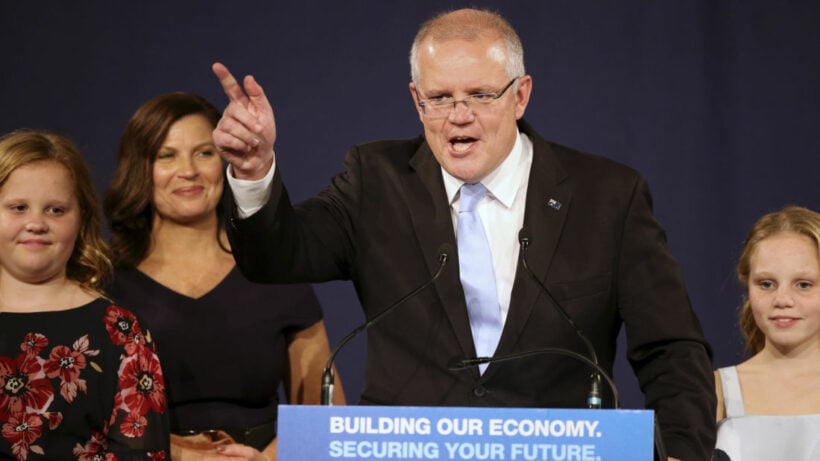 (For US readers, ‘Liberal’ is the name of the main conservative party in Australian, not to be confused with the way the term ‘liberal’ is used in American politics)

While it remains unclear if PM ScottMorrison’s Liberal party and their country-based National party coalition partners will win enough seats to form a majority government, the leader of the opposition Labor party, Bill Shorten conceded defeat shortly before midnight.

“In the national interest, a short while ago I called Scott Morrison to congratulate him.”

Shorten also announced he would stand down as leader of his party in the wake of its poll-defying defeat. The result was another monumental upset and a failure by pollsters who had been predicting a comfortable victory for Labor after six years in opposition.

Australia has compulsory voting and a complex preferential voting system, with big political, economic and cultural shifts from state to state. Australia has six states and two territories, once separate British colonies and now federated as the Commonwealth of Australia since 1901.

Morrison, who just weeks ago looked set for an electoral drubbing, is taking the plaudits for the turn-around win. Turning the polls on their head, he had been fated to enter the history books as one of the most short-lived prime ministers in Australian history.

But he closed the gap with a negative campaign and backing from the country’s largest media organisation, owned by Rupert Murdoch (who also owns Fox News in the US) , targeting older, wealthier voters concerned over Labor plans to cut various tax loopholes in order to fund spending on education, healthcare and climate initiatives.

In northern Sydney, former PM Tony Abbott, who once described climate change as “crap”, lost a seat he has held for a quarter century to independent challenger Zali Steggall, a lawyer and Olympic medallist in Alpine skiing.