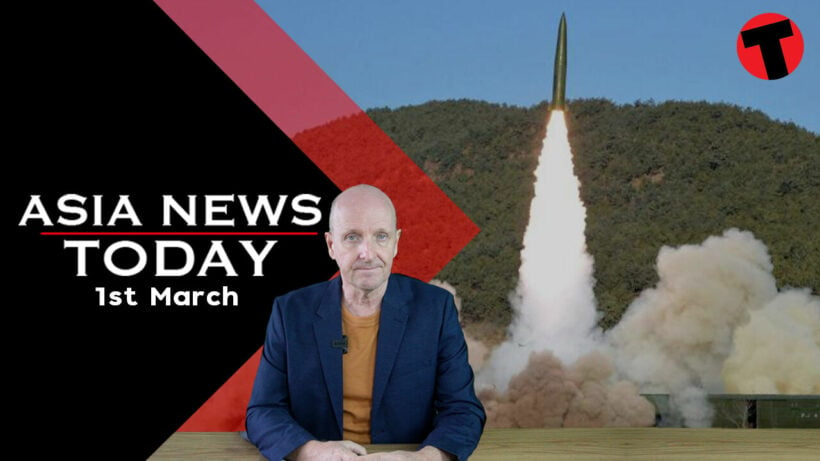 The Japanese government says it’s on alert for any provocations in East Asia… specifically from China, Russia and North Korea. In addition to North Korea’s launch of a ballistic missile into the Sea of Japan last Sunday, military exercises conducted by China and Russia are becoming more active in the waters and airspace around Japan over the past 3 months, prompting the government to step up surveillance activities. Last Sunday’s missile launch from North Korea was Pyongyang’s eighth launch this year. Then on February 22, the Chinese military announced landing drills with new vessels in the East China Sea between China and southern Japan. Observers believe the drills are intended to show the US the strength of China’s naval forces in eastern areas including Taiwan. Russia is also been stepping up military activities in the Far East, a key area in its conflict with the United States. But some members of Japan’s ruling Liberal Democratic Party, have noted that, since the US has decided not to intervene in the defence of Ukraine at this time, they’ve publicly said they are concerned about whether the U.S. military wold act in the event of a similar situation in Taiwan.

The Malaysian government says they’re negotiating with 12 countries to implement its own travel bubbles that they, and Singapore, call Vaccinated Travel Lanes. The Malaysian ministry says the countries were selected based on diplomatic relations and the need for cross-border travel. The countries include… Brunei, Indonesia, Singapore, Vietnam, Thailand, Australia, China, India, Japan, New Zealand, South Korea and the UKAt this stage, only Singapore has a current VTL with Malaysia, with VTL-Air and VTL-Land being implemented since November 29 last year. The discussion about VTLs has replaced earlier discussions to reopen all Malaysian borders in March as the Omicron situation has slowed down border reopening plans across much of the region.

Singapore’s Court of Appeal was urged to show “mercy” when it was hearing the final appeal of a Malaysian man facing execution despite criticism from supporters who claim he is mentally disabled. The man was arrested in 2009 for trafficking a small amount of heroin into Singapore. But the city state has some of the world’s toughest drugs laws, and he was handed the mandatory death sentence the following year.He was scheduled to be hanged last November but news about the man’s intellectual disabilities started attracting attention, with the EU, Amnesty International and even British billionaire Richard Branson condemning his sentence.The 34 year old’s lawyer urged the judges yesterday to show “mercy” by allowing the sentenced man to undergo an independent psychiatric assessment, noting that it was against international law to execute mentally disabled people.But the proceedings ended without a verdict being issued, and a ruling will be handed down at a later date. If the man is hanged, it would be the first execution in Singapore since 2019. But activists are also warning that Singaporean authorities are gearing up to execute three other drug traffickers in the next few months. Singapore maintains the death penalty for several offences, including drug trafficking and murder, and insists it has helped to keep the city-state one of Asia’s safest places.

Now a tale of two Covid situations…. Firstly the alarming situation in Hong Kong…Hong Kong is bracing itself as health authorities say the fifth wave of its Covid-19 outbreak is still to peak. Hong Kong’s morgues are filling up and some residents continues to panic buy in supermarkets ahead of a mass testing this month and even a possible full nine-day lockdown. Real daily infections are projected to hit 183,000 in the coming week, based on a study led by Professor Gabriel Leung, dean of the medicine faculty at the University of Hong Kong. But he fears that only a fraction of actual infections will be reported. Officials are worried that the city’s healthcare and hospital system remains overwhelmed and vaccination among seniors remains relatively low. They are predict that if anti-virals such as Paxlovid or Molnupiravir are not available, the deaths could go up to more than 46,000 by the end of April.With mortuaries barely coping with the surge in deaths, dozens of bodies have been left in hospital accident and emergency rooms. Hospitals have also been unable to provide beds to cope with the demand over the past month.

And traffic jams and crowds have come roaring back in Manila and 38 other Philipines cities and provinces Tuesday as a series of previous Covid restrictions were abolished.Businesses, public transport, shopping centres, theatres and restaurants were all bustling again as COVID-19 cases continued to drop along with more vaccinations across the country.
Whilst officials lifted most health restrictions, they still required the full vaccination of residents 18 and older against the coronavirus and the wearing of face masks both outdoors and indoors. But social distancing is no longer required and restaurants can now remove plastic barriers on tables. Birthday parties, weddings, sport events and family reunions, plus other gatherings can fully resume. And all government employees have been ordered to return to office for work.

Prices of palm oil in Indonesia… staple fat that’s used in the food processing and bakeries, have almost equalled that of Soyabean oil…. Apparently it’s never happened before. Curbs on exports self-imposed by Indonesia, the largest producer of palm oil in the world, and the general volatility in the commodity markets… is the cause this sudden price rise. AND it’s expected to continue for some time. The latest price for Refined Bleached and Deodorised Palm oil reached a similar price with crude degummed Soyabean oil last Monday.

South Korea will push to commercialise 6G internet and mobile services by around 2028.South Korea’s Science and ICT Minister made the remarks at the Mobile World Congress 2022, a mobile technology trade fair under way in Barcelona. The MWC is one of the top three annual tech events in the world. The minister said 6G will offer a network 50 times faster than the current service and an expanded coverage of up to 10 kilometres above the ground. So it looks like our quiet trips in aeroplanes may end up being interrupted with mobile phone games and conversations in the future.

Convert54
Well done and great progress. No doubt the doubters will soon be along to rubbish it.