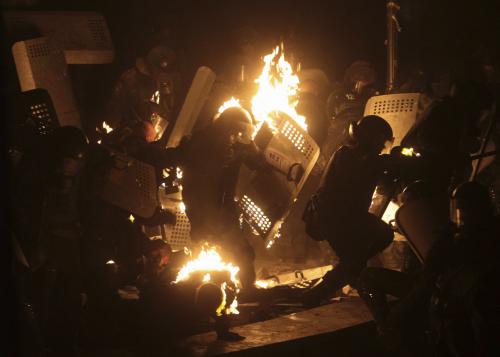 
Protesters clash with police at large Ukraine rally
Reuters / Phuket Gazette
PHUKET: Protesters attacked riot police with sticks in Kiev on Sunday and tried to overturn a bus blocking their path to parliament, as up to 100,000 Ukrainians massed in defiance of sweeping new laws aimed at stamping out anti-government demonstrations.

The clashes broke out after opposition politicians called on people to disregard the new legislation that bans rallies which have convulsed the former Soviet republic for two months.

Boxer-turned-politician Vitaly Klitschko, a main opposition leader and speaker at the rally, went to the scene of the clashes about 100 metres from Kiev’s Independence Square, and sought to persuade protesters to refrain from attacking police.

Protesters, however, continued to shower fireworks and other objects on riot police, who protected themselves with shields. As darkness fell, smoke bombs sent up clouds of smoke over the area, but many people trying to break through police lines had withdrawn.

The rally, the biggest this year, was spurred by legislation rushed through parliament last week which the opposition says will lead to a police state.

Significantly raising the stakes in the confrontation with

President Viktor Yanukovich, opposition leaders announced a plan to gather people’s signatures expressing no confidence in his leadership and that of parliament.

Denouncing as unconstitutional last Thursday’s hurried vote in parliament by Yanukovich’s supporters, they called for moves to set up a parallel structure of power – including a people’s assembly and a new constitution.

“Yanukovich and his henchmen want to steal our country. Ukraine is united as never before in its struggle against those in power today, in its determination not to allow a dictatorship,” declared Klitschko, the strongest potential challenger for the presidency.

Though setting up an alternative power structure may not be realistic, Sunday’s turn-out suggested it could also be difficult for the authorities to try to solve the crisis by use of force despite the court ban and the new laws.

Another opposition leader, far-right-nationalist Oleh Tyahnibok, dismissed the laws as unconstitutional as he spoke from the tribune on Kiev’s main Independence Square.

“So we have a right not to carry them out and we will sabotage them,” he said.

Yanukovich triggered the pro-Europe rallies when he did an about-turn last November and ditched a free trade deal with the European Union in favour of closer economic ties with Ukraine’s former Soviet overlord, Russia.

This brought tens of thousands of people on to the streets and protesters set up a permanent encampment on Independence Square. Though numbers have dwindled since, several hundred people remain camped out there or are occupying buildings such as City Hall.

The court ban on protests published on January 15 and last Thursday’s legislation aimed at prohibiting all form of public protests inflamed tensions again.

The laws – denounced by the United States and other Western governments as anti-democratic – would ban any unauthorised installation of tents, stages or use of loud-speakers in public places.

They banned, under pain of heavy jail sentences, participation in “mass disorder” and the wearing of face-masks or protective helmets, and outlawed dissemination of “extremist” or libellous information about the country’s leaders.

In a gesture of scorn for the ban on helmets, many protesters on Sunday wore saucepans and colanders on their heads, while Tyahnibok and another opposition leader, former economy minister Arseny Yatsenyuk, wore construction hard hats.

As well as showing the opposition’s enduring support, Sunday’s protests further enshrined Independence Square as the platform from which Yanukovich’s foes will campaign against him ahead of a February 2015 election.