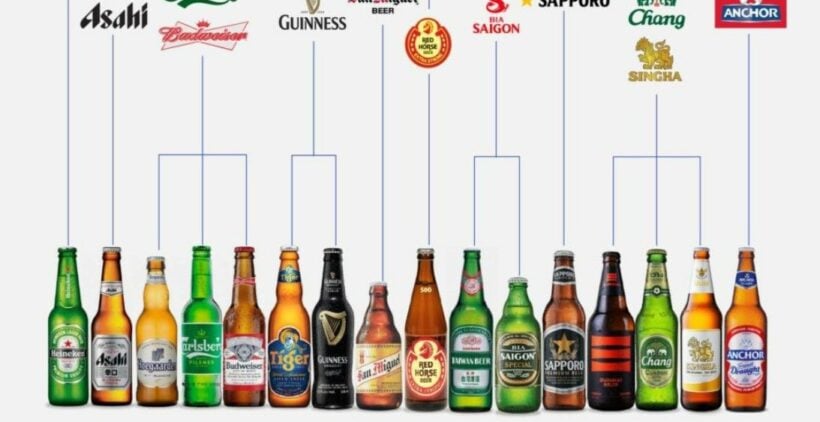 It’s International Beer Day and countries in Asia seem to be thirsty for a beer this year – well, at least on Google. With numerous government-implemented social distancing measures in place, people flock online to buy their wants and essentials. Unsurprisingly, many of them search for beer online, especially those in countries with stricter or longer lockdowns.

A study by iPrice Group indicates which countries among Southeast Asia, Hong Kong, and Taiwan google beer the most (in English and local languages), and it reveals the beer brands that dominate each market. Taking each country’s reach on Google into consideration, which is the number of the population that uses the search engine, the e-commerce aggregator recorded each one’s search volume. 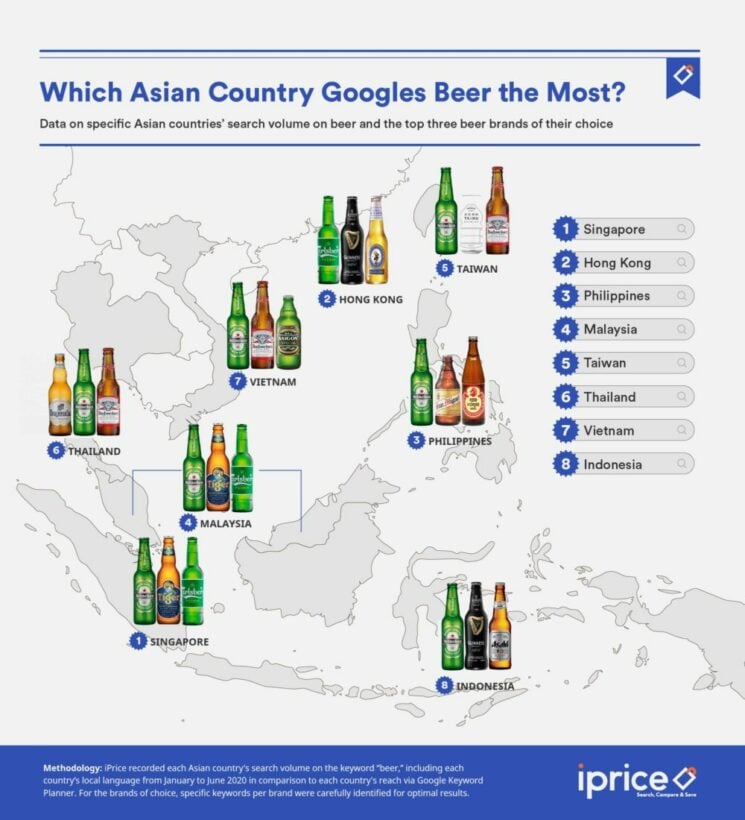 Singapore, Hong Kong, and the Philippines are the thirstiest (online) among them all

Singapore recorded to have the most search volume percentage on beer. Their total Google searches from the first half of 2020 accounts for 3.9% of the country’s reach. Contrary to the 2017 Straits Times article, which claimed that the island city-state’s people drank the least, they seem to be the most interested in the alcoholic beverage online.  This goes to show that their stringent laws on alcohol consumption do not affect Singaporeans’ online behavior.

Hong Kong, a country that didn’t even experience a lockdown, comes in second. Their searches for half the year account for 3.6% of the country’s reach on Google. On the contrary, the Philippines, who has been on lockdown since March, comes close with 3.3% of its reach. It makes sense for the developing country to have an increase of Google searches on beer this year since strict liquor bans and movement control measures were mandated. There was even a 69% increase in online searches for beer in March, right when the lockdown was implemented.

Surprisingly, Malaysia is not at the end of the spectrum. Even with a big portion of its population not being allowed to drink alcohol due to religious laws, its search volume for the year accounts for 2.6% of the population, even more so than Taiwan’s (2.3%), where the drinking culture is more open and prominent. However, this could be attributed to Taiwan’s early containment of the virus, which consequently doesn’t call for a strict lockdown.

Nightlife hotspots, Thailand and Vietnam, surprisingly rank 6th and 7th respectively in their search volume on beer. iPrice hypothesizes that the Thai and Vietnamese don’t find the need to google beer online since beer is quite easily accessible in both countries. Moreover, Vietnam hardly had any lockdown measures due to its great job in containing the virus early on. Thailand was also praised to handle the virus’ containment as well.

Expectedly, Indonesia googled beer the least among all the aforementioned countries. Since most of the population is Islamic, which doesn’t condone alcohol consumption at all, they are quite discouraged to do so. Additionally, Indonesia never experienced any strict lockdowns like some of its neighbors despite having a high number of coronavirus cases. 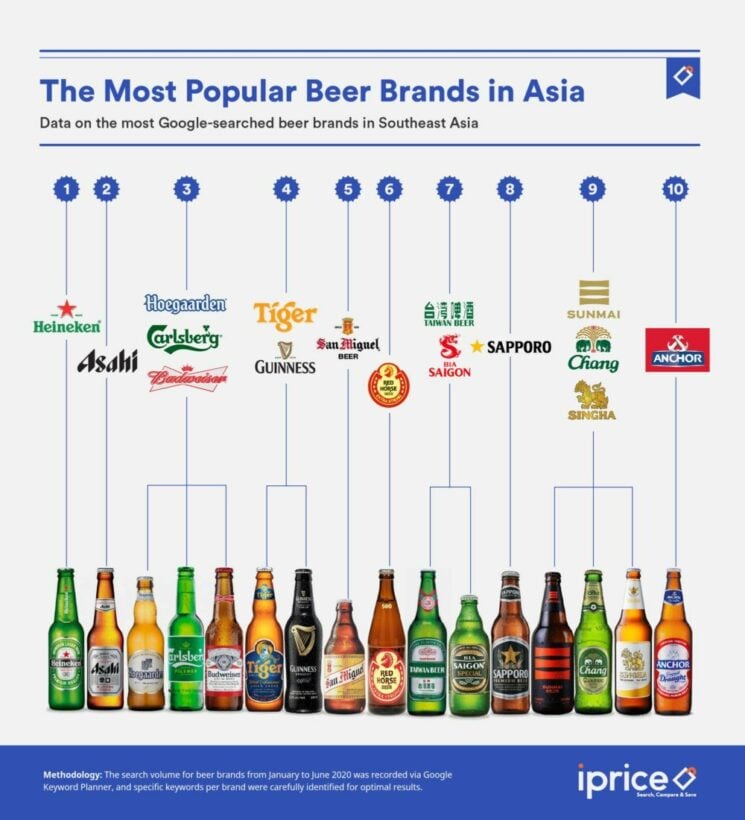 Beer brands that dominate the market

Dutch pale lager beer, Heineken, is the most popular beer brand in the 8 listed countries. It appears as part of the top three in each individual country’s search volumes, except Hong Kong’s. It’s safe to say that its efforts in investing in breweries and marketing across Asia have paid off. It is followed by the top Japanese beer, Asahi, which is pretty popular among Asian countries for its dry and light qualities that are best enjoyed with Japanese food.

Western beers, Hoegaarden, Carlsberg, and Budweiser all come in as the third most searched beers. All three have the same search volume estimates. The first homegrown beer brand that appears on the top is Singaporean beer, Tiger. Filipino beers, San Miguel and Red Horse are also pretty popular among Asians. San Miguel is well-known for its quality and affordable price while Red Horse is known for its unusually strong alcohol content.

iPrice also notes that some countries are quite loyal to their local beers. In countries like Taiwan, Vietnam, Singapore, and the Philippines, one or more of their local beers made it to the country’s top three most sought after beers. Thailand, Hong Kong, and Indonesia, however, do not search for their local beers as much as foreign brands.

iPrice recorded each Asian country’s search volume on the keyword “beer,” including each country’s local language from January to June 2020. iPrice gets the percentage of the total search volume in each country by computing it with each country’s “reach” on Google, which is the number of users who search when logged in to Google for a fair comparison. The search volume for beer brands from January to June 2020 was recorded, and specific keywords per brand were carefully identified for optimal results. Google Keyword Planner was the tool used to record all the data.