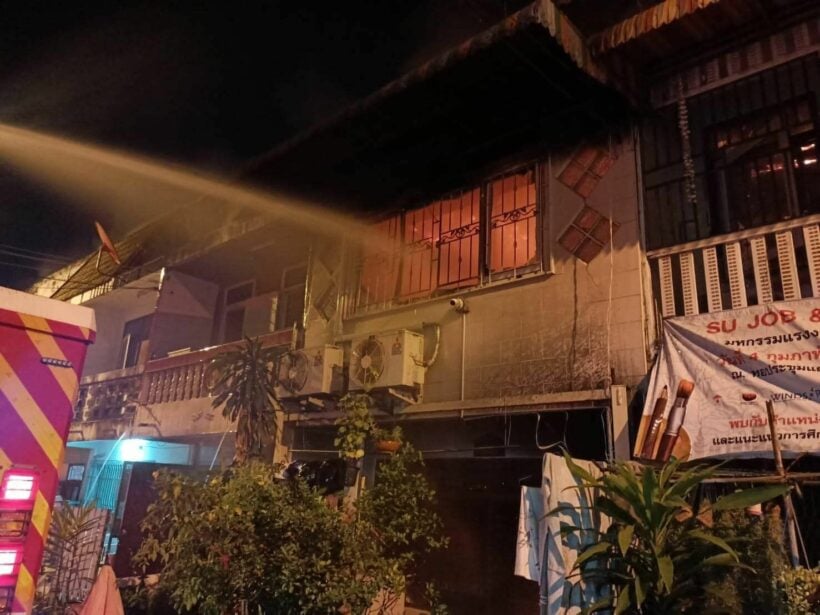 In the early hours of Thursday morning, three family members died in a house fire that spread to four homes in a row of houses in Samut Prakan province south of Bangkok.

A 34 year old mother and her 4 year old son were found burnt to death on the second floor bedroom of their home. They died hugging each other. Just outside the bedroom, a 62 year old man was found. He had died trying to escape, but iron burglar bars prevented him from doing so.

The husband was able to get away from the blaze. He revealed to authorities that he had four family members staying in his home. He slept on the ground floor while the others slept on the second floor.

When the fire started, everyone was sound asleep. He was awoken by the smoke and saw flames growing throughout the house. He yelled, telling everyone to exit the house. Unfortunately, it was too late.

Around 3:30 a.m., five fire trucks, firefighters and rescue teams were sent to the location. When they arrived, a fire had already overtaken five townhouses. It took more than an hour to put out the fire.

No one was hurt or killed in the other houses.

King Cotton
2 hours ago, Thaiger said: A 34 year old mother and her 4 year old son were found burnt to death on the second floor bedroom of their home. They died hugging each other. Just outside the bedroom, a 62…