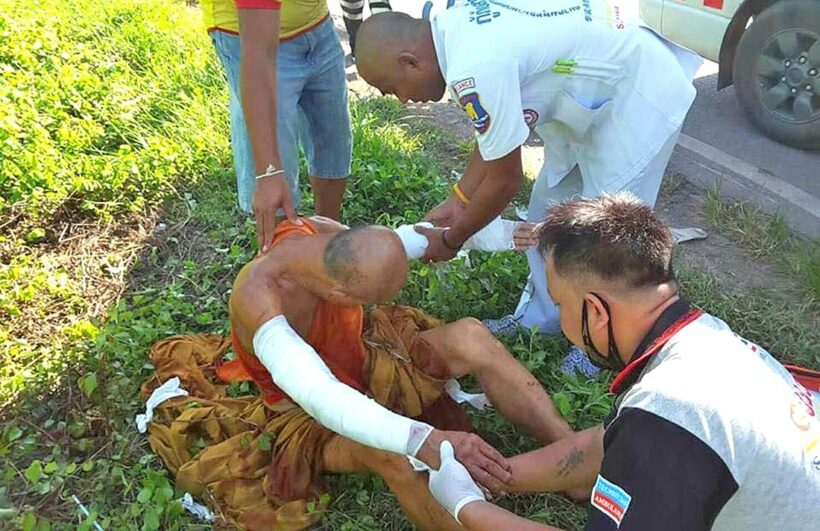 A 68 year old Buddhist monk has had a lucky escape after being mauled by sevenpit bulls while on a morning alms round in Samut Songkhram province. This information from a local police Facebook page.

The photos of Phakhru Samutkhanisorn Panyawichuro’s 50 bitemarks, including several wounds that required up to 20 stitches were circulated in Thai social media.

The Nation visited the scene, a small alley at the entrance to Luangpor Ban Laem Bang Hua Kruad monastery in Tambon Thai Hat, Muang district, along with Ban Bang Hua Kruad (Moo 5) village headman Direk Makhamek. The headman said the monk was on an alms collection round when he was first chased by one pit bull and, as he backed away and fell down, 5-6 other pit bulls attacked him.

Direk said the dogs belonged to car painter Saman Sitthibutr, who wasn’t at home at the time. He had kept the dogs within the house’s fenced compound but the pit bulls had managed to escape. 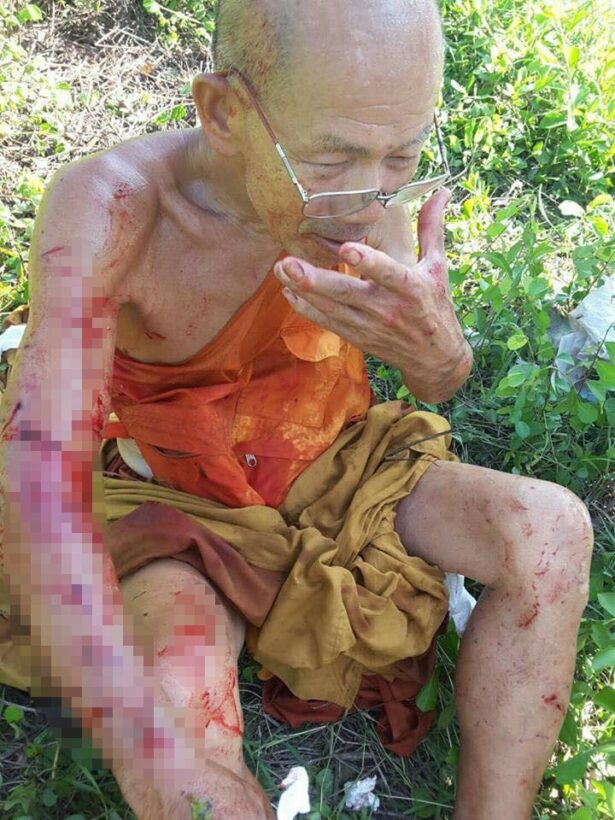 This was the second time the dogs had escaped. The first time was two weeks ago, Direk said, adding he would ask Saman to keep his pet dogs in kennels to prevent the re-occurrence.The monk, who was recovering at Somdet Phra Phutthaloetla Hospital, recalled that he had spotted the seven dogs so he avoided them by walking on the other side of street but the dogs attacked him anyway.

“When I was lying on the ground while being mauled by the dogs, I thought I was going to die. Fortunately people came out and chased them away and rushed me to hospital,” the monk said, adding the dogs’ owner had taken responsibility.

“He explained that he had kept the dogs in his house compound but they had managed to escape. I don’t want to put the blame on anyone, as no one wants this to happen,” the monk said, but urged dog owners to make sure their pets wouldn’t cause problems to others.

Acting hospital director Watchara Janjaroenkit said the monk had sustained 50 bite marks, some of which required up to 20 stitches. As he was given rabies vaccine, he would recover in one week if the wounds weren’t infected.

Companies like AirBnB ‘illegal’ for daily and weekly rentals in Thailand