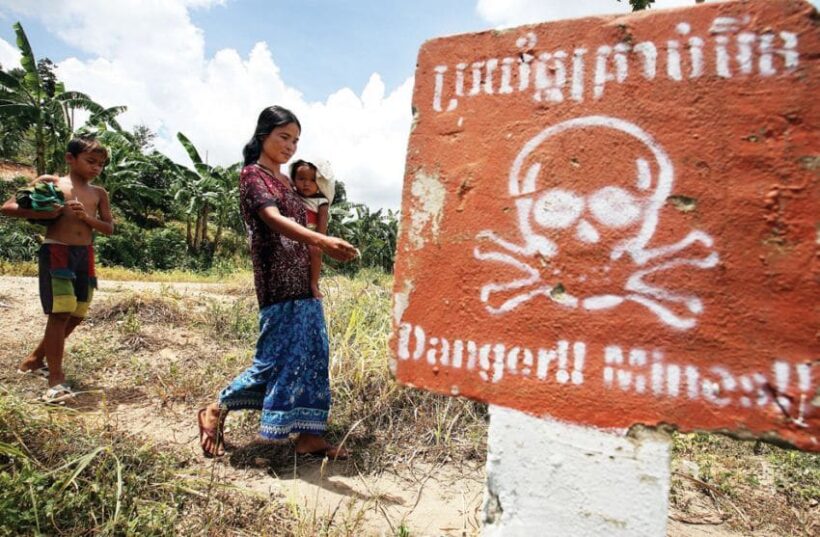 The Royal Thai Army has helped its Cambodian counterparts clear landmines along the Sa Kaew border in Thailand’s east. Together they’ve cleared around 1.72 million square metres in the past financial year.

The operation has been being carried out by the Humanitarian Mine Action Unit headed by Col Chitnupong Rodsiri. Sitthipol said the operation has so far cleared 2,570 mines.

Lt Nipon Rungruang of the mine team said around 306,100 square metres along the border at Ta Phraya remained to be cleared.

Cambodia has a major problem with landmines, especially in rural areas. This is the legacy of the three decades of war in the wake of the US incursions into Vietnam in the 60s and early 70s. Cambodia has some 40,000 amputees, one of the highest rates in the world. The Cambodian Mine Action Centre estimates that there may be as many as four to six million mines and other pieces of unexploded ordnance still in Cambodia.

The Chinese made landmines in Cambodia were placed by the Cambodian factions – including the Lon Nol, Khmer Rouge, the Heng Samrin and Hun Sen regimes, as well as the Coalition Government of Democratic Kampuchea – which clashed during the Civil War in Cambodia in the 1970s and 1980s.