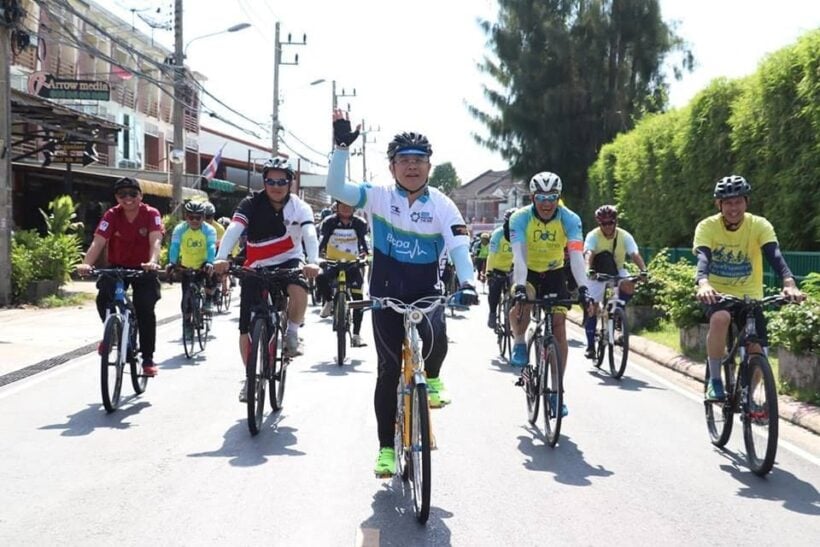 Cyclists were enthusiastically preparing on Sunday morning for the “Bike for Love and Warmth” ride to be led in Bangkok by His Majesty the King and coinciding with other rides starting simultaneously around the country in the afternoon.

Immigration Police Bureau chief Maj-Gen Surachate Hakparn affirmed that officers were ready to facilitate both Thais and foreign tourists participating in the rides.

Immigration officers will be at Dusit Police Station ready to help foreigners.

Surachate urged people to wear appropriate clothing and beware of pickpockets in the crowd. Uttaradit was already bustling on Sunday morning as an estimated 6,000 people began gathering at City Hall, many wearing commemorative yellow shirts, ready for a 29km ride.

Among them was 65 year old Prasopsak Sornlam, who’d already cycled 60 km from his home in Pichai district, starting out at 6am, and five year old Plairung Akarapitak, participating with her family.

In Phuket, more than 6,000 people registered for the ride from Phuket Town to Nat Chalong and back. Today’s event will cover 27 kilometres.

In Chiang Mai, some 10,000 people have registered for a 27 km ride from the International Exhibition and Convention Centre, passing various attractions before returning.

Provincial health official Dr Thoranee Kayee said 10 ambulances, 26 first-aid bikes and 40 medical personnel were ready if needed, and participants could undergo health checks and get medical advice prior to the start.

In Lampang, 5,400 people had registered for a 29km ride from the Government Complex past the city pillar shrine, Wat Saen Muangma, the train station and the Prince Bunyawat Wongmanit Monument to the Lampang Clock Tower.

Tha Chin Canal gets a volunteer clean up