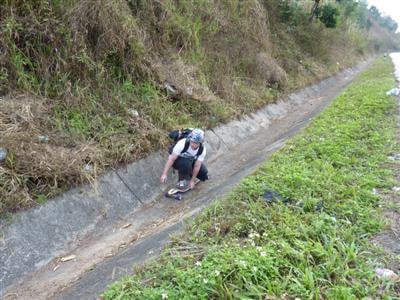 PHUKET TOWN: Two Swedes who are skating almost 5,000 kilometers from Chiang Mai to Singapore are on course to roll into Phuket next month for a quick respite – and maybe a foot massage or two.

Skating from 30 to 90 kilometers a day, Petersson is riding a long board skateboard and Larsson is strapped into rollerblades.

At the time of writing, the pair had skated through 10 Thai provinces and were 160 kilometers from Bangkok. They left Chiang Mai on January 16.

The pair plan to arrive in Singapore in June.

“No one has ever skated this route before. It has taken over a year of planning for us to prepare,” Petersson said.

The couple are skating to raise funds for the Swedish Childhood Cancer Foundation.

Petersson said he drew inspiration from the distance skating Guinness World Record holder New Zealander Rob Thomson, who skateboarded 12,000km across the USA, Europe and China in 462 days, ending in Shanghai in October, 2008.

With 8,180 fans following their progress on their Facebook page and plenty of Swedish media interest, Petersson welcomes the positive response for their cause.

Thais have also shown support for the pair’s adventure on this country’s highways.

“People in the North have been stopping and asking what we’re doing. Most of them clap and cheer for us,” he said.

One family invited the pair into their home for food, but as much as they enjoyed the local fare, Petersson has to be mindful of what he eats due to his allergies to curry, nuts, beans and peas.

With no support vehicle and the daily slog of skating busy highways, avoiding potholes and living out of small backpacks, Petersson said life on the road is tough, “but it’s the only way for us.”

Maria fell badly after hitting a pothole on their skate between Kamphaeng Phet and Nakhon Sawan, sustaining cuts and bruises to her leg.

Petersson has a sprained back and bruised foot and elbow after he lost control of his board on a steep descent en route from Mae Tha to Lampang City in Lampang Province.

But breaking his board, not bones, is Petersson’s greatest fear.

Petersson said they trained hard in Sweden to prepare for the trip.

Training involved 100 kilometer skates from his home in Eringsboda to his girlfriend’s hometown of Kristianstad in southern Sweden.

“At home I never use my car. I skate to work, I skate everywhere,” he said.

Maria’s inline roller blades are also designed for endurance and have 90mm wheels built for speed and durability.

Traveling light for obvious reasons, the pair carry three changes of clothes, a towel, a camera, a laptop and Petersson’s numerous allergy medications.

Sleeping wherever they can find guesthouses along the way, the pair said they are indebted to locals who have helped them bed down for the night.

In Thailand on 60-day tourist visas, the pair say they will arrive in Phuket on March 10, extend their visa 30 days and roll on down to Satun and enter Malaysia.

They plan to coast down Malaysia in under two months before eventually arriving in Singapore.

If they make it, the pair will fly to Bangkok and then back to Sweden.

Petersson said plans are already in place for his next international skate.

“My brother and I will skate from Germany to Italy this summer, but we’ll have to wait and see how our Asian adventure works out first,” he said.