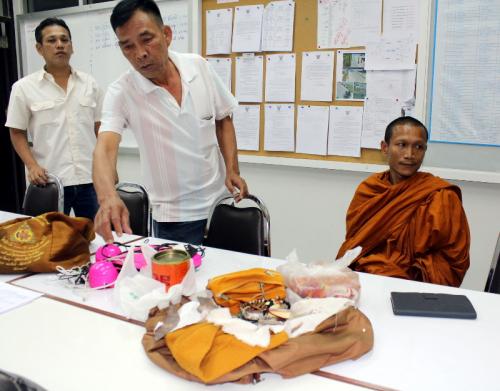 PHUKET: A monk who came to Phuket to visit a friend was arrested in Rassada yesterday and charged with sniffing glue and theft.

Police were alerted by villagers at about 6pm yesterday that a monk was sniffing glue in a pavilion at Pa Aram Rattanaram Temple, near Mission Hospital (map here).

When police arrived at the temple, they found Chaiyasit Janpetch, 33, sitting in the pavilion with a glue can and glue in a plastic bag beside him.

In his bag they found a tablet computer, a pocketknife, a mini DVD player and some cash, with a total value estimated at 7,000 baht, said Lt Col Prawit Engchuan of the Phuket City Police.

After Mr Chaiyasit confessed that he had been sniffing glue, he was taken to Buddha Mongkol Nimit Temple in Phuket Town to be defrocked and formally removed from the monkhood.

He was then taken for questioning to Phuket City Police station.

“I was a monk for six years, first in Trang and then in Pattani. I came to Phuket on June 29 to visit a friend in Patong,” Mr Chaiyasit told the police.

After arriving in Phuket, he went to the temple nearest the Rassada bus station and continued staying there after he was unable to contact his friend. He had no plans to return to Pattani, he said.

Mr Chaiyasit confessed to police that the day after he arrived in Phuket he stole 1,000 baht and a child’s schoolbag from a grocery store on Thepkrasattri Road, Lt Col Prawit said.

Mr Chaiyasit has been charged with sniffing glue and theft.