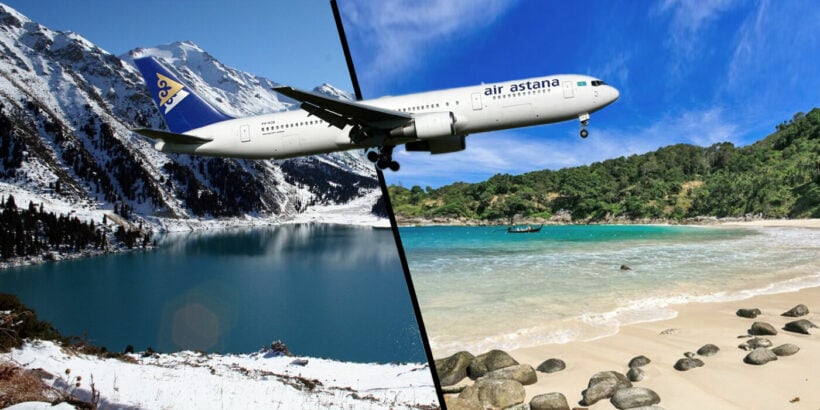 PHOTO: Almaty to Phuket flights resume from today. (via Maxpixel)

Today marked the return of Air Astana flights to Phuket from Almaty, the largest city in Kazakhstan, as 165 travellers arrived on a plane this morning. The flight marks a resumption of travel from the former Soviet Union republic and the current 9th largest country in the world by area.

Air Astana plans to continue and ramp up the route with up to 4 flights per week to and from Phuket in November. The inaugural flight was met by the director of the Tourism Authority of Thailand Phuket office, greeting and welcoming the 165 passengers as they exited the aircraft.

Almaty was the capital of Kazakhstan until 1997 when it was moved to Astana, which was then renamed in 2019 to Nur-Sultan. Almaty remains the commercial and cultural capital of the country though, with 2 million people residing there.

Thailand regards the Central Asian country as an expanding new market to promote Phuket and Thai tourism and the TAT Phuket directory called the flight “a great opportunity for Phuket to welcome this group of tourists.” The governor of Almaty had visited Phuket just before the Covid-19 pandemic and declared that 60,000 to 70,000 Kazakhs visit Phuket annually.

The flight left Almaty at 25 minutes past midnight and arrived at Phuket International Airport at 8:12 am. One VIP passenger on the relaunching flight was the Vice-President of Corporate Communications of Air Astana who travelled to Phuket to discuss tourism with Thai officials in hopes of bringing more flights and tours to the island.

The TAT says that there are still 6 other airlines waiting to resume international flights to Phuket in November, but specific airlines and countries were not mentioned.

AlexPTY
very ambitious to run a half-empty plane in and empty plane out of Phuket. How long do you think it will last?

BMA allows alcohol in restaurants in Bangkok with some rules