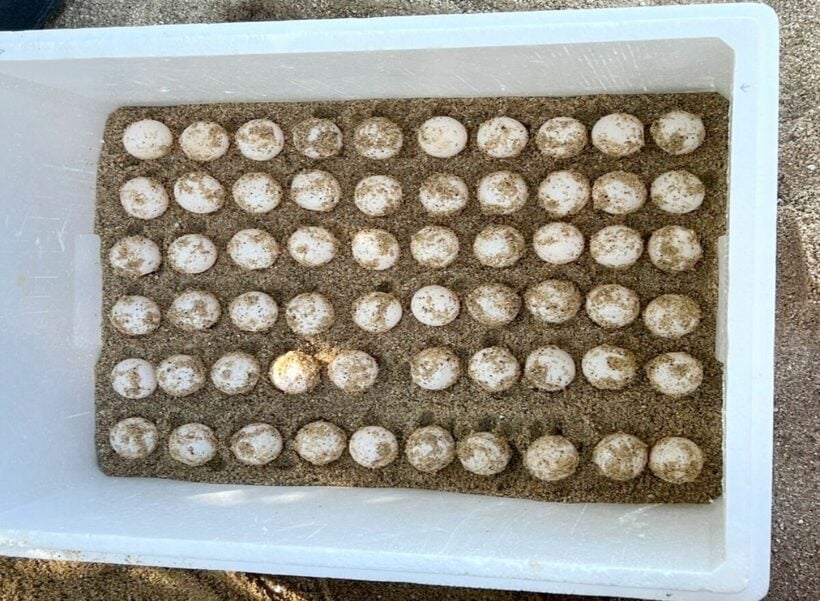 In Phuket, a green sea turtle was seen laying eggs on the beach for the first time this year last night on Ao Sane Beach in Rawei. The rare event is celebrated each time it is spotted on the island province. The green turtle waded onto the beach to lay its eggs and laid a total of 125 of them.

The Mayor of Rawei municipality in Muang district announced the green sea turtle eggs after joining the Department of Marine and Coastal Resources to observe the event. The turtle crawled up on the beach, dug a hole, laid 125 eggs inside, and filled the hole with sand before returning to the sea.

Officials were able to measure the turtle later as it was seen returning to shore. She weighed 100 kilogrammes and was 1.2 metres long by 75 centimetres wide.

The next morning, experts checked in on the nest of buried eggs, counted them and declared the 125 turtle eggs to be fertile. They were then carefully loaded up and taken to a research centre to be protected until they are later ready to hatch.

While sea turtles have been spotted nesting in growing numbers in recent years, it is still a rare occurrence with only 2 sightings of the nesting while it happened in all of Phuket last year at Laem Pai in Rawei, each with about 100 eggs. The Covid-19 pandemic effectively halted tourism on the island, and, as a result, has made humans more scarce on the beach, allowing turtles to nest in peace without the noise and light pollution.

Leatherback turtles, the largest species of sea turtle that can grow to be as big as 400 kilogrammes, were spotted laying eggs in the highest numbers in 20 years. Between October of 202 and February of 2021, 18 leatherback turtle nests were uncovered on beaches around Phuket.