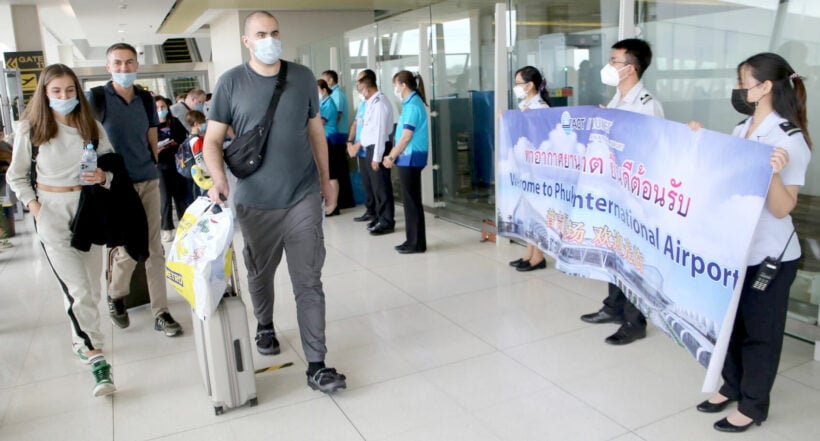 Phuket just welcomed the first international flight arriving from Russia as an Aeroflot flight from Moscow landed at Phuket International Airport today. 275 passengers rode the inaugural flight since Russia was added to the list of 63 approved Test & Go countries that can travel to Thailand without quarantine (aside from an overnight wait for a negative RT-PCR test in an approved SHA+ or AQ hotel).

The Aeroflot plane departed Moscow last night at 7:15 pm and flew nonstop to Phuket, landing at 8:45 this morning after a nearly 10-hour flight. The Russian Consul General in Phuket reported that this first Aeroflot passenger flight marked a return of Russian travellers to the island after 19 months without flights to Phuket.

He also confirmed that Aeroflot will be operating 2 flights each week between Moscow and Phuket beginning next week.

Russia has been experiencing a surge of Covid-19 infections on the rise since the beginning of October and has seen an average of about 39,000 new cases per day in the last week and trending upward. Despite the country being a key tourist demographic for Phuket traditionally, it was not surprising they didn’t make the original list of 46 countries that fully vaccinated travellers were allowed to travel from without quarantine, but perhaps due to pressure from tourism associations, it was added to the expanded list of 63 approved countries approved for quarantine-free travel to Thailand.

This follows the Russian-made Sputnik V being added to the list of approved vaccines for passengers arriving into Thailand in August, despite earlier in June failing to win approval for use in vaccination in Thailand. That approval allowed Russians vaccinated with Sputnik V to enter the Phuket Sandbox with a 7-day soft quarantine on the island before being allowed to leave the province. Now they can travel to popular Russian holiday destinations like Bangkok and Pattaya as well as Phuket.

Flights between Russia and Thailand are scheduled to resume fully on November 9 with twice a week flights from Moscow to Bangkok and Phuket as well as weekly flights from other major Russian airports.

Lowseasonlover
There has been plenty of Russians here in Phuket during covid, One condo project near me is like little Moscow Anyway I dont have a problem with the Russians
Stardust
Condo parties are coming back.

Soidog
14 hours ago, Poolie said: Not sniping from behind the keyboard like a bunch of schoolgirls. Umm. You mean like you are with that post😂
Stardust
5 minutes ago, Stardust said: Condo parties are coming back. When I read it the case came into my mind when they arrested this russian sex trainer and instructors (school) in Pattaya. Everybody tried to imagine how the teachers try…
Migele
On 11/6/2021 at 11:46 AM, Thaiger said: Phuket just welcomed the first international flight arriving from Russia as an Aeroflot flight from Moscow landed at Phuket International Airport today. 275 passengers rode the inaugural flight since Russia was added to…