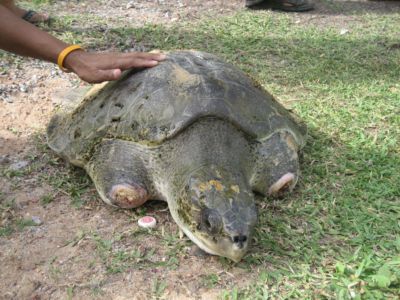 CAPE PANWA: Despite efforts by fishermen and marine biologists to save the life of a 1.8-meter zebra shark found off Sapan Hin on Monday, the fish died on Tuesday.

An examination carried out at Phuket Marine Biological Center (PMBC) failed to determine the exact cause of death.

“The animal’s abdomen was swollen and discolored. We thought it might have been pregnant, but a scan proved negative. We found nothing wrong in its stomach either. It might have become stuck in a fishing net,” said PMBC veterinarian Dr Sontaya Manawattana.

The shark was probably about five years old, he said.

“It is normal that a variety of marine life dies during the monsoon season. When this shark arrived at the PMBC, it was in a very dry condition and probably suffering from shock,” Dr Sontaya said.

Zebra sharks, known locally as plaa chalaam seua daaw (literally “leopard shark”), are so named because they have zebra-like stripes until adulthood, at which time the stripes change to cheetah-like spots.

Their international conservation status is listed as “vulnerable”.

In another sobering tale from the sea, two Olive Ridley Turtles were found washed up on Thalang beaches on Tuesday. Both turtles were missing flippers, and one of them was already dead when discovered by local residents at Nai Yang Beach.

Villagers in Mai Khao found the other turtle lying on its back and struggling to turn over after it washed up on the beach in heavy seas.

Although its two front flippers had been cut off, the turtle was strong and struggling to get back to the sea by pushing with its back flippers and pulling itself with its front stumps, said Michelle Mouille of the Mai Khao Sea Turtle Foundation.

Village headman Manote Saitong took the turtle to the PMBC, where it was treated with antibiotics and fed intravenously by Dr Sontaya and his team. At last report, the turtle, a female aged 16-20 years, was strong but not “responding well to captivity”.

He estimated that the turtle was wounded two to three weeks ago.

“She may be released in a few months, but life in the wild may be very difficult with only two back flippers,” he said.

The likely cause of the flipper amputations is fishing nets; either abandoned “ghost nets” or fisherman who deliberately slice off the flippers as a way of preventing damage to netting after sea turtles become entangled.