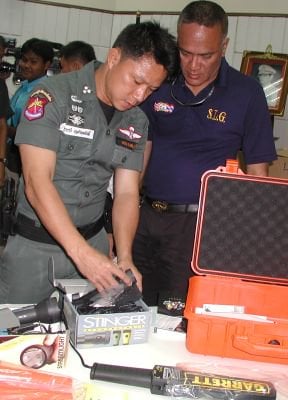 PHUKET CITY: As part of its fight against terrorism, the US Department of Defense has donated anti-terrorism equipment worth about 2 million baht to Royal Thai Police Region 8, which includes Phuket.

In a ceremony at Phuket Provincial Police Headquarters this morning, David Turner, Chief of the US Defense Department’s Force Protection Detachment at the US Embassy in Bangkok, presented the equipment to Provincial Police Region 8 Deputy Commissioner Pol Maj Gen Phuvadol Krasae-In.

The donation followed the successful completion in September of a five-day anti-terrorism training course organized by the US Defense Department. Fifty-seven police officers from Phuket, Phang Nga, Krabi and Koh Samui completed the course, which was held at the Patong Resort Hotel.

Accepting the donation, Gen Phuvadol said that even though the possibility of terrorist attack in Region 8 is regarded as remote, his officers were not being complacent.

“After the training, the Defense Department donated this equipment so that we could implement more effectively what our officers had learned during the course,” he said, adding that it was the first time Region 8 police had had access to such equipment.

The donation included lights and mirrors to check under cars for bombs, hand-held metal detectors, and other equipment designed to thwart terrorists before they can strike.

“The Bali bombing made us aware of the need to prepare ourselves for any situation within our area of control,” the general said, as he thanked the Defense Department for its support and vowed to include security aspects as a part of continuing police training.

Speaking in fluent Thai, Mr Turner said he had been honored to present Provincial Police Region 8 with the equipment, which would help ensure continued security in Phuket and other parts of southern Thailand.

He also said he was looking forward to continued mutual support and cooperation between the US Defense Department and the Royal Thai Police.