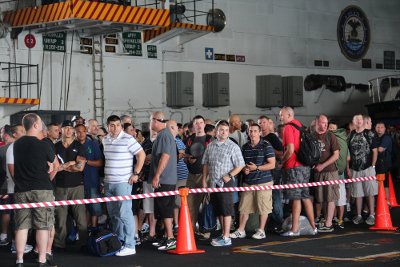 The USS John C Stennis and USS Mobile Bay dropped anchor in Ao Makham bay, off Phuket’s east coast, on Sunday, to give the 5,350 servicemen and women some much-deserved shore leave before possibly being re-deployed to the Middle East.

“Each day during the stay, sailors will be rotated off the ship daily in groups of 1,500 to 2,000 to spend time in Phuket, especially in Patong,” said Capt Ronald Reis, commanding officer of the nuclear-powered Nimitz class aircraft carrier USS Stennis.

During their stay, the sailors will also conduct three community relations projects. The first, yesterday, was to continue installing a flood-defence barrier beside a tsunami orphanage in Phang Nga.

The Home & Life Foundation orphanage is home to 26 children and five caretakers, but the canal that runs beside the village has suffered bank erosion, with recurring heavy rain runoff threatening the homes.

“Today, 19 sailors and a few of us from the US Navy League built a drainage line for rainwater runoff and started to build the Ben Abels Memorial, which will end up as a completed work by John Underwood as a tribute to Ben, who lost his life in the [2004] Tsunami. It was John who donated funds that bought the land for the Home & Life Foundation,” said Brad Kenny from the Navy League Phuket.

The remaining community projects to be carried out by US sailors during their stay comprise painting the perimeter wall at Baan Klong Sai School, also in Phang Nga, and painting the buildings and installing parking curbs and other miscellaneous jobs at the Phuket Soi Dog Foundation in Phuket.