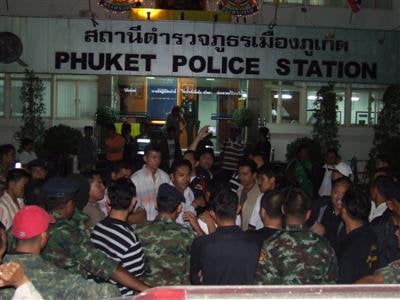 PHUKET: Three Phuket City Police officers are set to be transferred after a fight with a group of Territorial Defense Volunteers in a Phuket Town nightclub early on Saturday.

The altercation took place at the ‘Khon 101’ nightclub, a ‘songs-for-life’ establishment located near Nimit Circle.

The three volunteers claimed they were beaten at about 1am by a group of six men, including the three off-duty police officers.

The names and ranks of the three officers were not disclosed.

Seeking justice, the three men and about 100 supporters appeared at Phuket City Police Station at 6pm on Saturday with a truck equipped with a public address system.

The men, all in their early 40s, claimed the policemen set on them because one of them was in possession of a firearm.

Showing their wounds from the beating, the trio argued that the gun was legally-registered, they said.

A three-hour meeting ensued during which Phuket Governor Wichai Phraisa-ngop phoned in to advise Deputy Governor Chaiwat to ensure that both sides were treated justly in working out a solution to the dispute.

After the meeting, Deputy Gov Chaiwat told the protesters it had been agreed the three officers in question would be transferred off the island.

Police and defense volunteers must work closely together so some conflicts are inevitable, he said.

“This problem has been solved, so let’s take this opportunity to move forward in cooperating to bring peace and safety to the people of Phuket,” he said.

The transfer command from Region 8 headquarters is expected to be issued today, a reliable source told the Gazette.

The Territorial Defense Volunteer corps was set up by the Border Patrol Police in the 1950s in response to a perceived communist insurgency threat.